It began as a short story by Canadian author W.P. Kinsella in an anthology of baseball stories titled, Shoeless Joe 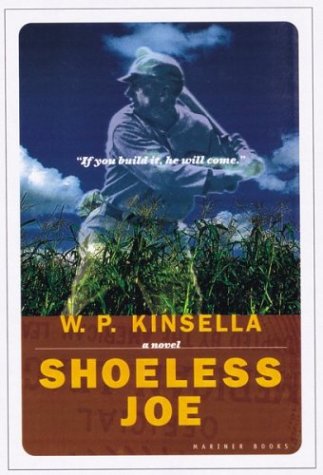 Jackson Comes to Iowa. Later on, Kinsella expanded the story into a novel called, simply, Shoeless Joe. Most all of us know it as Field of Dreams, the 1989 movie starring Kevin Costner.

The movie that, without even a close second, is my favorite movie of all time.

I never saw it in a theater. First time was on a VHS tape in the privacy of my living room. Probably for the better, because who wants to see a grown man bawling in public?

Most people know the story, a blend of baseball and magical realism. An Iowa farmer named Ray Kinsella hears a voice—actually, The Voice—in his cornfield say, “If you build it, he will come.” An image of a baseball field appears, and Ray figures that he has to build the field so that Shoeless Joe Jackson, his late father’s favorite ballplayer, can return and play baseball again. Sure enough, Ray builds the field, putting his family at financial risk, and Shoeless Joe’s ghost appears from what is left of Ray’s cornfield. Jackson was banned from 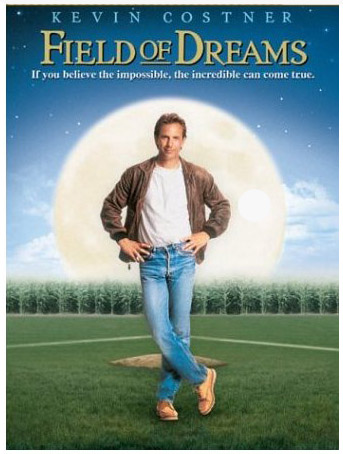 the game for life in the wake of the 1919 Black Sox Scandal, when eight members of the Chicago White Sox took bribes to throw the World Series. Soon others players have appeared, though it seems as if Ray and his family are the only ones who can see them.

Following other cryptic messages from The Voice, Ray first tracks down Terrence Mann, a fictionalized version of J.D. Salinger. (In the novel W.P. Kinsella actually used Salinger as a character, but Salinger threatened a lawsuit, so the Catcher in the Rye author never made it to the screen.) Next, he finds Archibald “Moonlight” Graham, a Minnesota doctor who as a young man had played half an inning in a major league game and never got to bat. (Since the doctor is dead by this time, Ray has to travel back in time to speak to him.)

Back on the farm, everything comes together. Young Archie Graham has his wish fulfilled and bats in a major league game, then—as old Doc Graham—saves the life of Ray’s daughter before returning to the cornfield. With foreclosure on Ray’s doorstep, Terrence Mann (the awesome-voiced James Earl Jones) makes his impassioned plea, “People will come, Ray.” (Check out the clip.) Then, as the players return to the cornfield, Shoeless Joe indicates the catcher and tells Ray, “If you build it, HE will come.” The catcher is John Kinsella, Ray’s father, as a young man. The 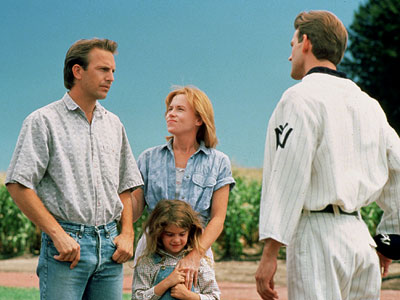 shaken Ray talks to John, introduces him to his wife and daughter (pictured), and they talk some more. Then, as John gets ready to leave, Ray says, “Hey Dad, wanna have a catch?” The film ends with father and son throwing a baseball around on the field as James Horner’s magical score plays on and hundreds of cars approach the farm. People will indeed come, and they’ll pay good money to see the field, watch the ballplayers and recapture some of their youth. 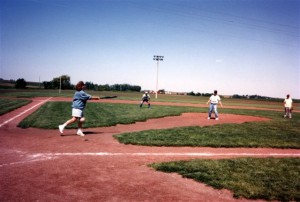 The field, which still welcomes visitors, in located in Dyersville, Iowa. My wife’s family lives in Iowa, around Cedar Rapids, and on one of our many trips we visited the field (that’s me on the mound). Other people were there on a quiet weekday morning, and before long all of us were out on the field with bats, balls, and gloves, playing an impromptu game. It just—happened. Later on I walked the entire perimeter of the field, stopping for a moment near the corn, and I thought about my dad, and… Well, do I have to tell you?

SWORDS & SPECTERS: My long-lost sword & planet novel, The Master of Boranga (Ro-lan: Book One) is finally available on Amazon Kindle. More on that soon.