Part One: Which Kong Is King?

Yes, this is going to be one of those IMHO posts, and you may or may not agree with which King Kong film is my favorite. No problem, we all know what we like. I might also add that I’m only talking about the three American-made films actually titled King Kong, as well as the 2017 version, Kong: Skull Island. No sequels, no spinoffs, and no Japanese versions.

THE EIGHTH WONDER OF THE WORLD!

Nearly ninety years old, the original King Kong (1933), conceived by Merian C. Cooper and Edgar Wallace, was a marvel of filmmaking for its time and, for decades thereafter, scared the crap out a lot of people. During the 1950s this included an impressionable kid from The Bronx, who couldn’t get enough of the classic. WOR Channel 9 used to show it about thirty times a week (not an exaggeration) on Million Dollar Movie, and I’d watch it fifteen to twenty of those times (also not an exaggeration). Sure, the special effects look dated, especially to recent and current generations, but I still check it out every once in a while. 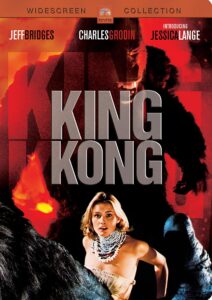 The 1976 version of King Kong was billed as a remake of the original. It starred Jessica Lange, Charles Grodin, and Jeff Bridges, a solid cast. Plenty of similarities, I suppose, to the 1933 story, but on the whole I thought it a bit campy. It did make a bunch of money and even spawned a sequel, which to date I’ve never seen. Reviews fell into the category of “not bad, not great.” When Kong climbed one of the World Trade Center towers at the end, rather than the Empire State Building, I was moved to offer my own assessment: “Meh.”

The 2005 version of King Kong was directed by Peter Jackson, coming off his recent 2001-2003 huge success with The Lord of the Rings trilogy, and wow, did he blow me away! Starring Jack Black, Naomi Watts, Adrien Brody, and the amazing Andy Serkis (Gollum) as Kong (motion capture), the film was a true remake of the original, even set in the 1930s, though nearly twice as long, and with amazing special effects as one would expect from Jackson. Reviewers loved it, and it won numerous awards, including three Oscars. 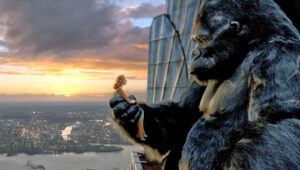 Classic dialogue from the first film echoed in this version. Two of the most memorable sequences came from Carl Denham (Black), the troubled filmmaker who led the expedition to Skull Island to capture Kong. After they accomplish this he tells the survivors of his crew, “The whole world will pay to see this! We’re millionaires, boys! I’ll share it with all of you. In a few months his name will be up in lights on Broadway: Kong, The Eighth Wonder of the World!” And, of course, the unforgettable last line of the film, after the planes shot Kong off the Empire State Building. Denham says, “No, it wasn’t the airplanes. It was Beauty killed the Beast.” 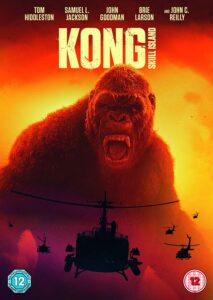 Well, having talked about the three films actually titled King Kong, that only leaves the 2017 version, Kong: Skull Island. And yes, this one is my absolute favorite! Why? I’ll address it at length in next week’s post.