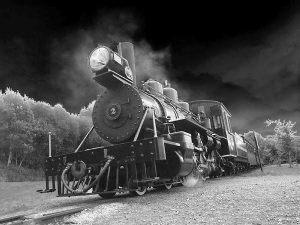 The Ghost Train rolls on.

To be clear, we’re not talking about the city in Missouri, but rather a small town in Canada, located in the province of Saskatchewan. This rural burg put itself on the paranormal map a long time ago by virtue of an eerie phenomenon: the lights of a ghostly train that roll down invisible tracks nearly every night.

As the legend goes, about a century ago, or maybe farther back—even the locals can’t say for sure—a conductor hopped off a train to do a routine check of the tracks ahead. Having partaken of strong drink, the tipsy fellow stumbled and fell across the tracks. The train, which had been following close behind, could not stop in time. The poor guy’s head became separated from the rest of his body. (Reminded me of the opening scene in the film Silver Bullet, based on the Stephen King story.)

Subsequent to that, folks began reporting seeing strange lights on the tracks, coming up from the south. At first thought to be the lights of an approaching locomotive, it soon appeared evident that the train would never arrive. When those who witnessed the sight began walking down the tracks to see if the train had stopped, the lights disappeared.

There were two lights, by the way, a fact corroborated by many: a brighter top light, typical of a locomotive, and a smaller red light below it. The drunken conductor had been waving a lantern as he staggered along the tracks, prior to being decapitated. Now, he continued to swing the lantern from side to side in a futile search for his head. 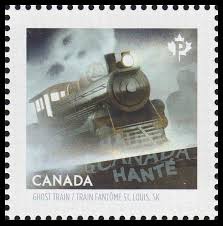 At some point the train line was abandoned, and the tracks were torn up. Most believed that the ghost train phenomenon—also referred to as the St. Louis Light—would cease. Guess what, it has continued to this day.

Among many reports of sightings, I noticed one of fairly recent vintage on the “Virtual Saskatchewan” website. Some visitors to the area drove out to the site where the railroad line had passed through. At just about the midnight witching hour they spotted a bright light, typical of a train approaching, and a smaller red light just below it. They watched it coming for a long time, but never arriving, until finally they got back in their car and drove toward it down a nasty dirt road. They thought that they were getting nearer when the lights suddenly vanished. Moments later, the lights reappeared—behind them. Scared the crap out of the poor folks.

Tales like this abound, from locals and visitors alike. The St. Louis Ghost Train has even been explored on the TV show, Unsolved Mysteries. In 2014 the postal service of Canada issued a stamp depicting the ghost train. 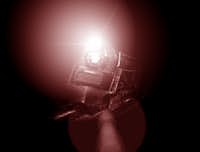 In 2001-2002 a couple of 12th grade girls decided to try and explain the mystery of the ghost train as a science fair project. They concluded that, due to an optical phenomenon called diffraction, the lights of the train were coming from the headlights of vehicles traveling on the nearest roadway. (Don’t ask me; I flunked science.) Their efforts won them some of the top awards at the science fair.

But here are a couple of curious facts. First, the roadway was located over five miles from the site of the old tracks. And second, the St. Louis Ghost Train had been reported rolling down the tracks before the automobile ever came to Saskatchewan.