Myths And Legends: The Jersey Devil 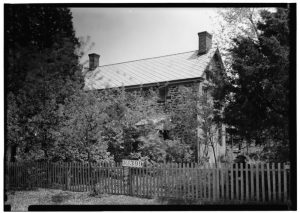 Did a woman named Deborah Leeds give birth to a spawn of Satan in 1735? According to the folklore of the forested Pine Barrens region in the southern part of what is now New Jersey, she sure as heck did. Here is one possible scenario about the creation of the legend that is known as the Jersey Devil.

Japhet Leeds had left over an hour ago to fetch the old midwife and had not yet returned. Deborah Leeds fretted over her husband’s absence, for she knew that her time was near. More than likely the storm raging outside had slowed him down. Earlier that day their twelve children had gone to stay at a neighbor’s cabin. They did not need to be on hand for the birth of the 13th child. 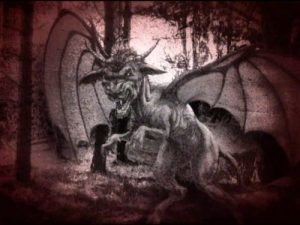 An impression of the Jersey Devil.

As the pains of childbirth grew closer together, Mrs. Leeds chided herself for the many times she had cursed the misfortune that would bring them a potentially unlucky 13th child. She regretted it now; but if it were God’s will, maybe the birth would turn out fine.

There! Mrs. Leeds heard the front door open then slam shut. Japhet and the midwife hurried into the next room. After checking on his wife Japhet went to heat up water, as instructed by the old woman. He returned with a panful then was ordered out of the small room, pulling the doorway curtain behind him.

The midwife had attended hundreds of births and anticipated no problems, though she worked quickly, realizing that she had arrived just in time. Within ten minutes Mrs. Leeds was pushing the baby out. The midwife spoke soothingly to her charge as she grasped the infant’s head. Then…

A newspaper sketch of the Jersey Devil.

Japhet, who had been stoking embers in the fireplace, heard the simultaneous screams of the women. He dropped the poker and started across the room but froze halfway there by a sound that could not have emanated from any human throat. The blood-chilling shriek drowned the cries of the women as a thing from Hell burst through the curtained doorway.

The creature, moving on hooved legs, had a snarling, goat-like head atop a vertical leathery body. Short “arms” ended in clawed hands. A forked tail whipped around spastically, knocking over a chair. It continued to shriek as it eyed Japhet who, stunned, had fallen backward to the floor. The Hell-thing snapped at the man then turned toward the fireplace, where it unfurled a pair of bat-like wings. It propelled itself up and out of the chimney and, still screeching, it disappeared into the storm-drenched woods of the Pine Barrens.

THE DEVIL OF LEEDS

True or fanciful, variations of this story became the stuff of legend in the area. Prior to the early twentieth century sightings of the Leeds Devil, or the Devil of Leeds, were numerous. Commodore Stephen Decatur, a renowned naval officer, was reputed to have fired a cannonball at a “flying creature” in the early nineteenth century. At around the same time Napoleon Bonaparte’s brother, Joseph, who had an estate in the area, reported seeing the “monster that wandered the Pine Barrens.” Just about everyone that lived in or near the region had some kind of encounter with the beast. 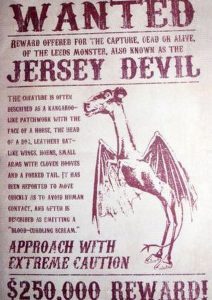 Was the Jersey Devil wanted by the law?

But stories of the Jersey Devil, as it came to be known in the twentieth century, peaked early in 1909. For whatever reason the newspapers of that time began reporting hundreds of encounters with the creature, not only around Pine Barrens but also from all over the state, even in nearby Pennsylvania. Police in Camden, NJ allegedly fired at the beast after it attacked a social club. So did cops in Bristol, PA. A trolley car in a small town was terrorized.

As the newspaper coverage expanded, so did the sightings of the Jersey Devil, even as far away as Delaware and Maryland. Schools were closed, and workers at various businesses were urged to stay home. Armed vigilante groups scoured the countryside hunting for the creature. A zoo in Philadelphia offered a reward for the Jersey Devil. And on it went.

While the mass hysteria of 1909 eventually died down, sightings of the Jersey Devil continued throughout the twentieth century. In 1960 another reward was offered by a group of merchants in Camden for the capture of the creature, They wanted to build a private zoo to show it off.

THE JERSEY DEVIL IN POP CULTURE

Who knows if there is any truth to the legend of the Jersey Devil? Skeptics believe it to be the creation of early settlers as a form of entertainment. Also, the Leeds family was not particularly well-liked by the locals.

And if folks needed a venue for such a monster, the Pine Barrens was the perfect place. A desolate land, it became “home” to brigands and other outcasts of society, particularly poor farmers, moonshiners, poachers, etc. These so-called “pineys” fabricated stories about themselves to discourage others from passing through the Pine Barrens. 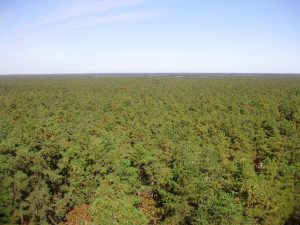 The Pine Barrens…does the Jersey Devil still roam these woods?

Whatever the case, the Jersey Devil became a ubiquitous figure in pop culture. The New Jersey Devils became an NHL team in 1982, the name chosen in a poll by state residents. A 1993 episode of The X-Files is titled “The Jersey Devil” and addresses the legend. The Jersey Devil has appeared in a number of video games and many books, films, and documentaries. There is even a Bruce Springsteen song and video titled “A Night with the Jersey Devil.”

As for believers, the Jersey Devil still has its share. In particular there is a group called the “Devil Hunters,” who say that they are “the official researchers of the Jersey Devil.” They collect every bit of data that they can find, and they visit historical sites relevant to the creature. They even go on nocturnal hunts in the Pine Barrens, determined to prove that the Jersey Devil is real.

To tell the truth, I’m kind of rooting for them. 😊