Myths And Legends: The Island Of The Dolls

There is an otherworldly place not far from the heart of the sprawling Mexico City called La Isla de las Muñecas—the Island of the Dolls. It is located in one of the channels off Lake Xochimilco. For those of us creeped out by the “true” stories of Annabelle and Robert the Doll, or the fictional Chucky, this island can be a waking nightmare.

As the legend goes, during the 1950s the owner of the island, Julián Santana Barrera, found the body of a girl who had drowned after becoming entangled in some lily pads. Barrera also found a doll floating nearby, which he assumed had belonged to the girl. He hung the doll from a tree as a show of respect to the deceased, and to allow her spirit to move on peacefully. 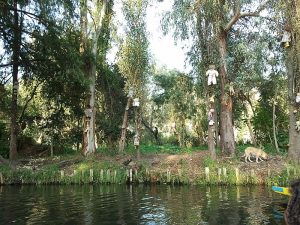 A view of the island from the lake.

Subsequent to this, all manner of weird occurrences befell the superstitious Barrera. Cowering in his island shack, far from any population, he heard footsteps, menacing voices, and horrific screams from the surrounding foliage. Dios mío! he thought. What to do to drive away these espíritus malignos—these evil spirits?

The terrified man set off on a mission that consumed him for the next five decades. He searched for dolls in garbage cans and dumpsters, or floating in the many canals around Xochimilco. Whole dolls, or just body parts…it did not matter. He hung them from trees and other foliage—hundreds of them, perhaps thousands—always praying for the dead girl’s spirit to find peace.

Julián Santana Barrera died in 2001. His body was found in the same spot where he discovered the dead girl fifty years earlier.

La Isla de las Muñecas is now a popular place for tourists to visit. (Detractors call it a tourist trap.) Some visitors bring more dolls, or doll clothes to replace those that have deteriorated. There are those who swear that the dolls whisper to them. So is the island haunted? Not according to the locals, who insist that the place is charmed.