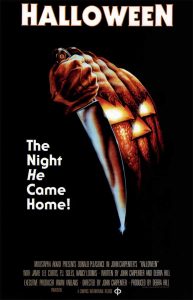 I thought it would be fun to revisit my first Halloween playlist from a number of years past. And yes, I am going to watch these films once again. What’s not to like!

As an old(er) guy living in a 55+ community, I no longer have to hand out Halloween candy at the front door. Not that I minded doing it back in the day, except that I usually wound up eating at least half of what I (over)bought. And, as the author of four horror novels, my warped mind had me answering the door in the most grotesque fright mask, which sent many little trick-or-treaters screaming to their moms, who waited on the curb.

These days I spend Halloween enjoying a horror movie marathon…at least three shockers, and sometimes more. The rest of the year, when I watch one scary movie I always balance it out with a comedy or musical afterward. Not today; my first three choices await me, and with over 250 horror movies in my vast DVD/Blu-Ray library, I may scare the crap out of myself well into the night. But for now, here is the “for sure” playlist. 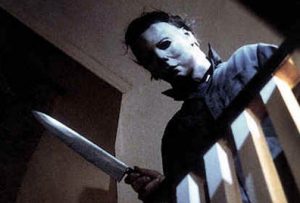 Is that the boogeyman?

Well, of course! This is THE classic Halloween movie. Whatever my other choices are, I watch this one every October 31st. The film was director John Carpenter’s first major success in the genre, and it launched scream queen Jamie Lee Curtis into a long and successful career. Made on a budget of $300,000, it grossed about $70 million, making it one of the most successful indie films ever. It carries a 94% rating on Rotten Tomatoes, and a decade ago the Library of Congress selected it for preservation in the National Film Registry as “culturally, historically, or aesthetically significant.” All this for a film that barely had a promotional budget back in 1978.

Many people credit Halloween as the first in an endless line of teen slasher movies. Unlike many of its successors, the film has a minimal amount of blood and gore. It is just—well, scary. Its success led to seven sequels, as well as 2007 and 2018 reboots. What was original in Halloween became cliché in many of the slasher flicks over the next two decades. 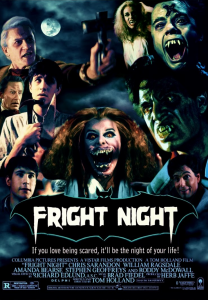 I haven’t seen this one in years, so it will be fun revisiting what I think is a perfect Halloween movie, with vampires and plenty of great humor. Charley Brewster is a teenager who enjoys classic horror movies. His favorite TV program is called Fright Night, hosted by former movie vampire hunter Peter Vincent (Roddy McDowall).

When Jerry Dandridge (Chris Sarandon) moves in next door, Charley is suspicious of him. His fears are well founded, because the new neighbor is a vampire. Charlie freaks then tries to tell anyone who will listen about his discovery. Naturally, they all think he’s a can short of a six-pack. As the young boy said in Eight Legged Freaks, “No one is going to believe me, because I’m a kid, and they never listen to the kid.”

Desperate, Charley turns to Peter Vincent for help. Does the aging vampire hunter have enough wooden stakes and crosses to save the day? Or are they both insane to even think of destroying a prince of darkness? Fright Night is a hoot. 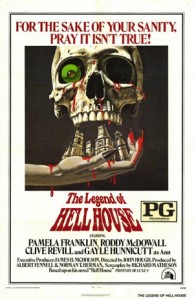 Why not a haunted house story on Halloween? This gem is based on the novel Hell House, by the late, great Richard Matheson, one of my favorite writers. He wrote the screenplay for this British production, the main difference being that the Belasco House—“the Mount Everest of haunted houses”—was moved from Maine to the British countryside.

An eccentric rich guy hires physicist and paranormal debunker Lionel Barrett (Clive Revill, voice of the emperor in The Empire Strikes Back) to investigate the possibility of life after death by spending a week in the infamous Belasco House, where ghosts galore roam the endless nooks and crannies of the creepy place. Seems that Emeric Belasco, who built the house, was a pervert and a murderer, and the spirits that roam the halls are the victims of his atrocities. An earlier investigative team also perished, save for one.

Barrett bring along his wife, Ann (Gayle Hunnicutt), a mental medium, Florence Tanner (Pamela Franklin), and a physical medium, Ben Fischer (Roddy McDowall—yes, again), the only survivor of the previous investigation. While Barrett will do all he can to prove that the house contains little more than unfocused electromagnetic energy, the mediums know better. These people are in some serious shit here.

Being 1973, don’t expect a lot of blood and gore. That said, The Legend of Hell House is one scary, unnerving movie, as befitting the awesome Richard Matheson. (See my post, “Still Scary After All These Years.”) I’ll probably save this one for after it gets dark. Or maybe not…