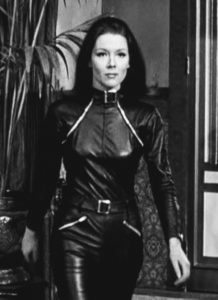 British actress Diana Rigg passed away last week at the age of 82 from cancer. She had a long and successful award-winning career in theater, film, and television. But her most iconic role—at least for us older folks—was that of Emma Peel, the kick-ass government agent who worked alongside the dapper John Steed (Patrick Macnee) in protecting the Crown from week to week in the 1960s TV series, The Avengers. Like most young males—and older ones too—I had a serious crush on the sexy spy. (Ms. Rigg, by the way, did not care for her sudden and unexpected rise as a sex symbol.)

Among my favorites is Ms. Rigg’s role as a “Bond Girl,” the Countess Teresa di Vicenzo—she preferred Tracy—in the 1969 film, On Her Majesty’s Secret Service. This sixth entry in the franchise was notable for a number of reasons. Sean Connery had pulled out of the series, and the new James Bond was a relative unknown named George Lazenby. Asked by Tracy’s father, a mob boss, to “tame” his headstrong daughter, Bond is instead smitten with her, and they are ultimately married—the only time in the franchise that this happened to 007. Their wedded bliss, sadly, lasted about twelve minutes. Both Lazenby and Ms. Rigg gave moving performances in a Bond film that ultimately became one of the better-reviewed entries in the series. (Lazenby never played Bond again.) 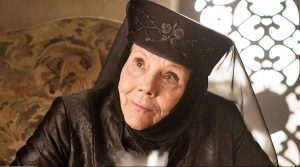 Ms. Rigg’s final major television role was that of Lady Olenna Tyrell on the immensely popular series, Game of Thrones. She performed in eighteen episodes from 2013-2017 and was nominated for a number of awards. Ms. Rigg’s final appearance on the show received much critical acclaim.

You will always be needed, Mrs. Peel. R.I.P. Diana Rigg.