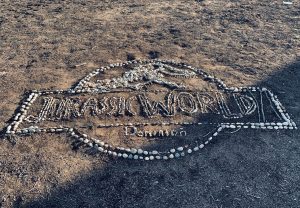 The long wait is almost over! (Drum roll here.) Jurassic World Dominion is scheduled to open in theaters on June 10th. I haven’t seen a film inside a movie theater in years, but I will make an exception for this one. I mean, it’s dinosaurs, right? Even better: it merges the main characters from the old Jurassic Park trilogy—Dr. Alan Grant (Sam Neill), Dr. Ellie Sattler (Laura Dern), and Dr. Ian Malcolm (Jeff Goldblum), with those from the initial two Jurassic World films, Owen Grady (Chris Pratt) and Claire Dearing (Bryce Dallas Howard). How cool is that!

The storyline has so far been kept under wraps. We do know it takes place four years after the events in Jurassic World: Fallen Kingdom and that humans are now co-existing with dinosaurs all over the globe. Sounds good to me. The official trailer, just released, might offer a clue. It is available on YouTube. 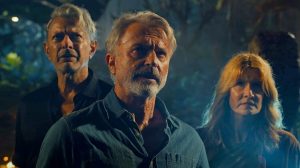 Drs. Ian Malcolm, Alan Grant, and Ellie Sattler are up to their necks in dinosaurs…again.

The premier of Jurassic World Dominion is at least a year late in coming. No surprise why: good old Covid-19, which even halted production after it had begun. But that is all in the past, so for this one time only I’m going to break my own rules about using two particular common expressions: “I’m looking forward to seeing Jurassic World Dominion, and I just can’t wait!