Well, not exactly, but we do have Daniel Craig and Harrison Ford co-starring in the 2011 sci-fi/western film, Cowboys & Aliens. With that kind of star power, and some decent reviews, you’d think this movie was a blockbuster hit, but not so fast. It did poorly at the box office—which means I could have written it up as a Guilty Pleasure. Either way, despite its goofy title I love this film. Gee, what a surprise, eh?

With that tagline, here is a brief overview of the film, which was based on a graphic novel of the same name. In 1870s New Mexico outlaw Jake Lonergan (Craig) awakens in the middle of the desert. He is wounded, has amnesia, and is wearing an odd metal bracelet around his wrist. As the story progresses he has disjointed visions of a woman in a cabin, a weird creature, and a number of other images that he does not understand. 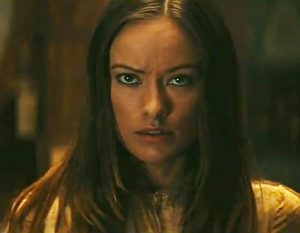 Who is the mysterious traveler?

Wandering into a nearby town, Jake becomes an instant hero by taking down Percy, the asshole son of a nasty cattle baron, Colonel Woodrow Dolarhyde (Ford), who basically owns everyone there. When the sheriff recognizes Jake from a “Wanted” poster, he arrests him. Dolarhyde and his men storm into town demanding Percy’s release. He also wants custody of Jake, who stole some of his gold.

A standoff between the sheriff and Dolarhyde ensues but is quickly interrupted when alien spacecraft attack the town and begin abducting some of the townsfolk, including Percy and the sheriff. (They sort of lasso them…pretty cool.) The strange device on Jake’s wrist is activated, and he realizes it is a powerful weapon. He shoots down one of the vessels as the others fly off. A wounded alien escapes.

As Dolarhyde organizes a posse to follow the alien and rescue the townsfolk, Jake rides off to look for the cabin of his vision. He is followed by a young woman named Ella Swenson (Olivia Wilde), a mysterious traveler who believes that Jake is the key to defeating the aliens; she appears to know something about the device on his wrist. Jake rebuffs her, but when he reaches the cabin some of his memories return, and he realizes that both he and the woman of his vision had previously been abducted by the aliens. With that in mind, he joins the posse. 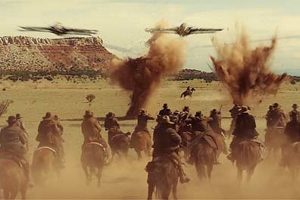 That night, in a rainstorm, the posse takes refuge in a huge, upside-down paddle wheel steamboat—in the middle of the desert. Dolarhyde comments that there is no body of water within 500 miles large enough to accommodate such a vessel. The assumption is that the aliens lifted it up and deposited it there. While inside, the wounded alien attacks them and kills one of the men.

By the morning, as they realize what may lie ahead, a number of the posse head back to town. Jake, Dolarhyde, Ella, and a few others are all that remain. But they forge ahead…

I’ll stop here while mentioning that there is so much more to come—especially in the extended cut, which I viewed on a Blu-ray disc. We’ll meet Jake’s old gang, who may be more predisposed to cutting off his cajones than helping him battle the aliens, and a dwindling tribe of Chiricahua Apaches, whose lives have also been affected by the aliens. And most of all we’ll discover the truth about Ella Swenson in some of the most incredible scenes of the film. Cowboys & Aliens will be on my every-so-often watchlist for a long time to come.

A footnote: the inverted steamboat in the film was based on the real story of the Iron Mountain, a riverboat that sailed the Mississippi River for a decade before mysteriously disappearing in 1882. It is a compelling story, and one that I’ll write about next week.