Wherever you want to slot it in the Terminator universe, Terminator: Dark Fate has me guardedly excited in advance of its November 1 release date. Maybe that has to do with the fact that James Cameron, who wrote and directed the first two films—The Terminator (1984) and Terminator 2: Judgment Day (1991)—is once again involved. Or maybe it is because the original stars are back. Long-in-tooth Linda Hamilton returns as Sarah Connor, and longer-in-tooth Arnold Schwarzenegger plays the retired T-800. Even Edward Furlong, the teenaged John Connor in the second film, reprises his role.

So you may ask, how is all this possible? I suppose that when you’re dealing with time displacement, a key element in all of the films, the simple explanation is that the latter three films—Terminator 3: Rise if the Machines (2003), Terminator Salvation (2009), and Terminator Genisys (2015) take place in alternate timelines. Okay, I’ll buy that.

According to co-distributors Paramount Pictures and 20th Century Fox, Terminator: Dark Fate is a direct sequel to the second film. A press release reads thusly:

“Twenty-seven years after the events of Terminator 2: Judgment Day, a new modified liquid Terminator (Gabriel Luna) is sent from the future by Skynet in order to terminate Dani Ramos (Natalia Reyes), a hybrid cyborg human (MacKenzie Davis), and her friends. Sarah Connor comes to their aid, as well as the original Terminator, for a fight for the future.” 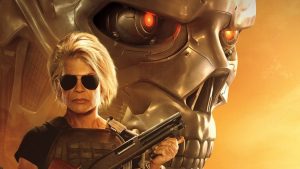 Sarah Connor is once again a badass!

Okay, no speculation here. I will for sure check out Terminator: Dark Fate and report back afterward. Just one thought: The Terminator is a classic, and one of my favorite films all-time. And Terminator 2: Judgment Day is one of those rare sequels that is as good as, or even better than, the original. Expectations are high, for sure. But hey, it’s James Cameron…