Is Anyone Watching Pandemic Movies?

Given the current state of affairs, you’d think people would be avoiding pandemic films like the plague. Curiously, my research revealed the opposite to be true. Folks just can’t seem to get enough of them, even though most are sheltering at home (we hope) while living through one of the worst outbreaks in history. 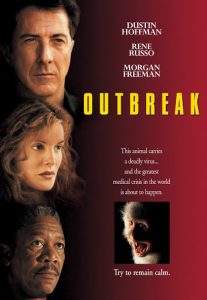 For example, the Vulture website lists “The 79 Best Pandemic Movies to Binge in Quarantine.” Who even knew there were that many films—and these are only “the best!” The streaming services are loaded with them. And yes, they include “zombie” films, but also regular “contagion” and “post-apocalypse” stories, as well as alien infections. In this post I’m going to list two of my, uh, “favorites.”

This 1995 “medical disaster” film opens with a quote from Nobel Prize laureate Joshua Lederberg, PhD, that might as well have come out of today’s headlines. He said, “The single biggest threat to man’s continued dominance on the planet is the virus.” Wow…

A deadly virus is discovered in an African village during the 1960s. The U.S. military’s answer to keep it under control: bomb the crap out of the area and kill a whole bunch of people. 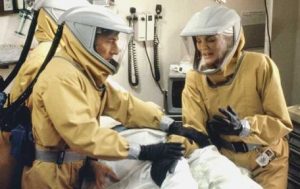 The Motaba virus is decimating an entire town.

Fast forward nearly three decades. A U.S. Army virologist, Colonel Sam Daniels (Hoffman), is sent to Africa to investigate another outbreak of a similar virus, this one potentially even more deadly. He is concerned that this one will spread, but when he reports this to his superiors, they dismiss it. These are the same assholes that kept the first outbreak a secret.

The film follows the travels of a small monkey, the host of the virus, as it is captured by poachers in Africa and smuggled into the U.S. It winds up in a California town, where it first infects a pet shop owner before being released in the woods. The virus becomes airborne, and soon most of the town is infected, with many suffering horrible deaths.

Daniels and his team quarantine the town and work desperately to discover a cure. The military, of course, has other plans, which include bombing the town into oblivion so that they can use the virus as a biological weapon. Outbreak, despite being twenty-five years in the rearview mirror, is a riveting story that bears some uncomfortable similarities to the current situation. 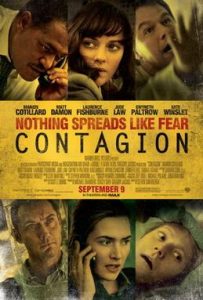 Did I say, “uncomfortable similarities to the current situation”? Viewing the 2011 “medical thriller,” Contagion, is much like watching the five o’clock news, I kid you not. It has become the most watched pandemic film, if not the most watched film period, on streaming services and pirated sites. The film has been praised for its realistic depiction of the scientific and public health—and yes, political—response to a pandemic. It talks about social distancing (ten feet, in this case), sheltering in place, not touching your face, the effects of crowd psychology and loss of social order. We see food and other items stripped from store shelves. All of this, sadly, has become the “new normal” in 2020.

Multiple parallel stories—a trademark of director Steven Soderbergh—follow ordinary people, health care professionals, politicians, conspiracy theorists and others as the pandemic grips the globe. The time frame is from “Day 2” (subtitled) to “Day 135.” Why not “Day One”? I wondered that too the first time, until “Day One” concluded the film with a brief, jarring scene of how random a series of events could launch a pandemic capable of killing millions.

Beth (Gwyneth Paltrow) does not have long…

The pandemic in Contagion spreads from Asia, same as the coronavirus. An American businesswoman (Gwyneth Paltrow) returns from Hong Kong after coming in contact with quite a few other people. (Handshakes, hugs, toasts, etc. Not until “Day One” do we see how she became infected.) By the time she arrives in her hometown of Minneapolis she is sick, and within twenty-four hours she is dead, as is her young son. In the parallel stories we also see the others with whom she came in contact perish, though not before infecting others. The exponential speed in which the virus spreads is horrifying.

Another all-star cast—Marion Cotillard, Matt Damon, Kate Winslet, Laurence Fishburne, Jude Law, Bryan Cranston, among others—performs brilliantly in this chilling, accurate depiction of how a pandemic can affect the entire globe. Contagion is not easy to watch (he said, by way of understatement), but there is much that can be learned from this thoughtful film. If you can handle watching only one pandemic movie, make it this one.