“I Ain’t Got Time To Bleed”—Memorable Lines From PREDATOR 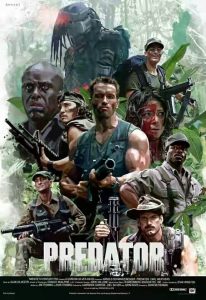 The sci-fi/horror film, Predator (1987), made a ton of money, got great reviews, and spawned a franchise that continues right up until today, with one or two more sequels apparently in the works. It didn’t hurt that its cast included Arnold Schwarzenegger and Jesse Ventura, two future governors, and one of the most iconic “villains” in the genre, a trophy hunter from another world that can render itself invisible with a cloaking device. As this predator stalks Arnie’s elite rescue team through a Central American jungle, the memorable lines just keep on coming. Here are just a few of them.

One of the team members tells Blain (Ventura) that he’s bleeding. His response: “I ain’t got time to bleed.” (I believe he wrote a book with that title.)

Dutch (Arnie) nails a bad guy to a wall with an enormous knife and tells him, “Stick around.”

Billy (Sonny Landham), a Native American and an expert tracker, senses that they are being hunted: “There’s something out there waiting for us, and it ain’t no man. We’re all gonna die.” 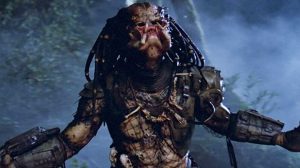 Mac (Bill Duke) is not pleased that a CIA guy named Dillon (Carl Weathers) has come along on the mission: “You’re ghostin’ us, motherfucker. I don’t care who you are back in the world, you give away our position one more time, I’ll bleed ya, real quiet. Leave ya here. Got that?”

Blain has a disgusting habit of chewing tobacco, and no one wants to join him: “Bunch of slack-jawed faggots around here. This stuff will make you a goddamned sexual Tyrannosaurus, just like me.”

The team has captured a guerilla named Anna (Elpidia Carillo), who tells them, “When I was little we found a man. He was like…like butchered. The old women in the village crossed themselves and whispered crazy things, strange things. ‘El diablo cazador de hombres.’ Only in the hottest years this happens. And this year, it grows hot. We begin finding our men. We found them sometimes without their skin…and sometimes much, much worse. ‘El que hace trofeos de los hombres’ means ‘the demon who makes trophies of man.’” 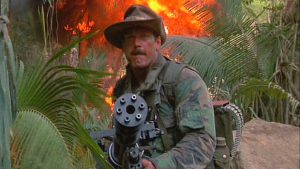 Anna has seen the Predator materialize: “It changed colors, like the chameleon. It uses the jungle.” To which Dillon replies, “You saying that Blain and Hawkins were killed by a fucking lizard? That’s a bullshit psyche job. There’s two or three men out there at the most. Fucking lizard.”

Mac, thinking he’s killed the Predator by stabbing it a gazillion times, discovers he only succeeded in killing a wild boar. Poncho (Richard Chaves) says, “Jesus, you killed a pig! Think you coulda found something bigger?” To which Mac profoundly replies, “Fuck you, Poncho! Fuck you!”

After a trap fails to snare the Predator, Dillon says, “So what are you gonna try next, cheese?”

Dutch figures out that they’re being hunted: “He came to get the body. He’s killing us one at a time.” 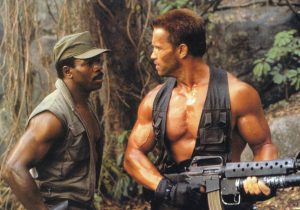 “How’d you get us into this shit storm?”

I’ll end with one of the most iconic lines in all of filmdom. Dutch and the Predator are face to face. The hunter takes off his helmet, revealing a rather, uh, disturbing countenance. Dutch says, “You’re one ugly motherfucker!”

By the way, an actor named Kevin Peter Hall did a great job portraying the Predator. His story, unfortunately, was a tragic one. I wrote about him in a post titled, “Harry And The Predator: A Sad Ending.” Check it out.