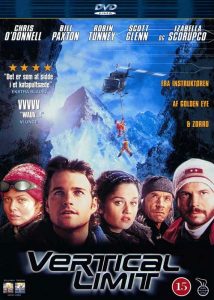 I was on the fence about presenting the 2000 survival thriller, Vertical Limit, as a Guilty Pleasure. No problem with the box office, and it did have some decent reviews, including one from Roger Ebert. But other reviewers were brutal, including one who called it “…ludicrously contrived and clichéd.” In any case it is one of my favorites. (Remember? Easily entertained?)

THE MOUNTAIN WILL DECIDE

With that silly tagline, here is a brief overview. Adult siblings Peter and Annie Garrett (Chris O’Donnell and Robin Tunney) lose their father to a climbing accident in Monument Valley. Dad forces Peter to cut the rope rather than drag his kids down with him, but Peter has no choice. Annie blames him for their father’s death, leaving them estranged.

Fast forward three years. Annie is a now a well-known mountain climber. Peter, a freelance photographer, hasn’t climbed since that day. They encounter each other at the K2 base camp in Asia. (K2 is the second-highest peak in the world.) It is not a comfortable reunion. Annie is there to accompany rich guy/asshole Elliot Vaughn (Bill Paxton) to the summit for a stupid PR stunt. A climbing expert named Tom McLaren will lead the party. 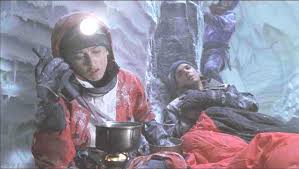 IS THE RICH GUY A VILLAIN?

Enter reclusive Montgomery Wick (Scott Glenn), who blames Vaughn for the death of his wife, an expedition guide, during a previous foray. He has lived on the mountain ever since in the hope of recovering her body. Wick believes (rightfully) that Vaughn deprived his wife of the dexamethasone (dex) needed to prevent pulmonary edema in order to save himself.

During the climb, the party is warned of an impending storm. McLaren wants to turn back, but Vaughn, despite his earlier promise to let the leader make all decisions regarding safety, insists that they continue. They do, and naturally everything goes to hell when the storm hits. There are deaths, and Annie, Vaughn, and an injured McLaren become trapped in a crevasse. 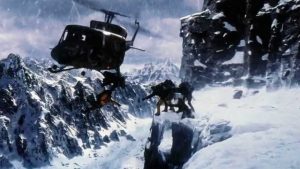 The helicopter drop could be deadly.

Base camp has lost radio contact with the group, but Annie manages to send a message via Morse code, which Peter recognizes. He organizes a rescue party, including Montgomery Wick and four others, and the six are dangerously dropped off by a helicopter, which can only go so high. They split into three pairs to approach the crevasse from multiple directions and increase their chances of success. Each pair is carrying nitroglycerine—a rather dangerous prospect.

The majority of the film follows, and it is comprised of one breathtaking scene after another. Peter is obsessed with rescuing his sister. Vaughn is thinking about depriving McLaren, who is quite ill, of the dex he needs to survive, a repeat of what occurred with Wick’s wife. And what is the inscrutable Wick going to do to Vaughn when he finds him? 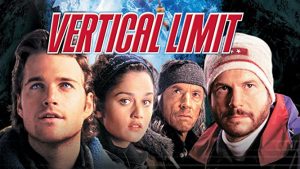 Vertical Limit is an engaging thriller with solid performances, great scenery, and non-stop action. The heck with what the critics thought!