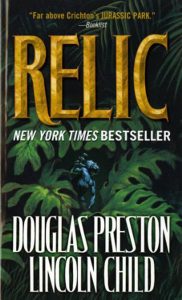 This 1997 horror film is based on the best-selling book, Relic, by popular authors Douglas Preston and Lincoln Child. Fans of these two know that this novel marks the initial appearance of the enigmatic FBI Agent Pendergast, who is totally absent from the movie. A box office disappointment with mixed reviews (although Siskel & Ebert loved it), The Relic definitely qualifies as a Guilty Pleasure, one that I always enjoy watching.

THE NEXT EVOLUTION IN TERROR

With that tagline—and no spoiler alert—the story opens in South America as anthropologist John Whitney from the Museum of Natural History in Chicago studies a jungle tribe. He drinks some strange brew that the natives give him, which clearly affects his mind and causes him to scream when he sees a native wearing a mask of a monstrous jungle creature called the Kathoga. 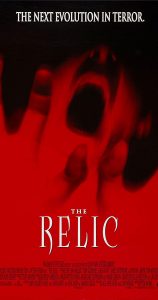 Shortly after this, Whitney is at a port frantically begging the captain of a freighter to remove some crates that had been loaded on board for him. The captain refuses, as they have to leave immediately. Whitney climbs on board as a stowaway and searches for the cargo, but it is not there. We see it on the dock, labeled for the museum.

Six weeks later the ship arrives in Chicago with the crew missing. Lt. Vincent D’Agosta (Tom Sizemore) of the Chicago PD investigates and discovers the crewmen in the bilge, their heads separated from their bodies. 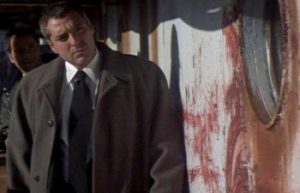 D’Agosta finds a bloody scene on the ship.

Whitney’s crates arrive at the museum, where Dr. Margo Green (Penelope Ann Miller) and her mentor, Dr. Albert Frock (James Whitmore), study the contents—a bunch of leaves and a small statue of a Kathoga. Seems like a strange cargo, but they cannot ask Whitney about it, for no one has heard from him. Margo sends the leaves, which have some sort of fungus on them, to be incinerated but retains a few for testing. The Kathoga statue will be prepared for the museum’s upcoming major exhibit, “Superstition,” which will open with an important fundraising event.

NASTY NIGHTS AT THE MUSEUM

That night, a museum security guard is murdered by…something. His head is torn off, and later on an autopsy reveals that the hypothalamus was removed, the same as the crewmen on the ship. D’Agosta makes the connection and, believing a killer is at large in the museum, has it shut down the next day while they search the museum’s extensive catacombs. Dr. Cuthbert (Linda Hunt), the museum director, protests the closure, since the fundraiser is scheduled for that night, but D’Agosta stands firm. 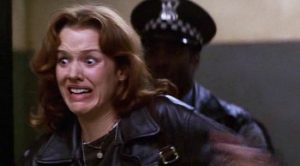 Margo’s first sight of the headless security guard is not pleasant.

The previous day a tiny beetle had gotten into the container where Margo stored the leaves. When she opens the box out pops the bug, now huge. She crushes it (yecch) then runs a test on the mutated thing that reveals both insect and reptilian DNA. Just what is it with the fungus on those leaves?

Down in the depths the police are confronted by a homeless, mentally ill ex-con and are forced to kill him. Finding the security guard’s wallet on him, all but D’Agosta are convinced they got their murderer. He wants to keep the museum closed while they continue searching, but the mayor, who plans on attending the event that night, overrules him.

As the time for the fundraiser nears, Margo and Frock keep working to try and discover the mystery of the stuff on the leaves. D’Agosta orders all areas of the museum other that the main exhibition hall shut down, trapping Margo and Frock in their lab. The cops, still searching the catacombs, are attacked by something huge and deadly. D’Agosta survives and hooks up with Margo and Frock; the other cops are dead. The creature attacks them, but they elude it.

Margo now realizes that the creature is a living, monstrous Kathoga, once something much smaller that mutated after eating the fungus on the leaves. Without those leaves to sustain it, the thing goes after the next closest substitute: the human hypothalamus. 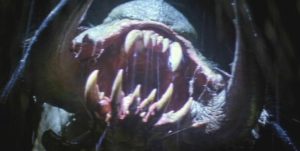 You do not want to mess with the Kathoga.

So now they know—but does it matter? Above them, the well-heeled men and women of Chicago are pouring into the museum for the gala fundraiser. Dr. Cuthbert leads them into the creepy “Superstition” exhibit. In the meantime, D’Agosta manages to contact an underling and orders him to evacuate the museum.

This is about the time when blood starts dripping down on the guests, not to mention the headless body of a cop. Panic and hysteria ensue, and as folks trample one another while fleeing, the security alarms kick in and the heavy metal doors start to come down. Some of them manage to escape, but many others are trapped inside the museum—a definite “Oh crap!” moment. Seems that they’ve gone from being guests to something else: a smorgasbord…

There is plenty more to come, and just as with many films in this genre, you’ll have to set aside any pretense of believability. But, it is exciting, and the only thing I’ll say is that Margo Green makes a great kick-ass heroine. If you like “monster movies,” The Relic will entertain.