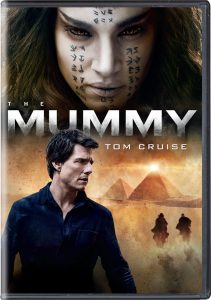 This Tom Cruise-fueled reboot, The Mummy, is a serious contender for the guiltiest of my Guilty Pleasures. It lost a chunk of change for the studio, and it has an anemic 16% rating on Rotten Tomatoes due to its brutal reviews. And if that’s not enough, the film garnered eight Razzie nominations, with one win for Worst Actor—yep, Tom Cruise.

But what do I care? Being easily entertained, I enjoy watching this action/adventure/horror film and will continue to do so until the Mother Ship comes to pick me up.

With that tagline, here is a brief overview of The Mummy. In ancient Egypt a pharaoh’s daughter, Ahmanet, is in line for the throne until Dad takes another bride, who bears him a son. The princess, seriously pissed, makes a pact with Set, god of the underworld, who provides her with a nasty knife, the Dagger of Set, which has a huge ruby on its hilt. She does away with her father, stepmom, and kid, then tries to stab a mortal man so that Set can enter his body and rule the world with this evil woman at his side. But the priests intervene, and Ahmanet is mummified alive. The sarcophagus is taken far from Egypt to Mesopotamia (Iraq), where it is buried.

In the twelfth century Crusader knights return to England with the knife. The ruby is buried in a tomb with one of the knights, while the blade is hidden in a church. 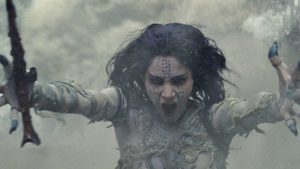 Ahmanet’s powers have been regenerated.

In “present day” the tomb is unearthed by a clandestine organization called Prodigium, which is dedicated to destroying ancient, supernatural horrors. Its leader is Dr. Henry Jekyll (Russell Crowe), who has to keep shooting up to prevent his turning into Mr. Hyde. (I’m not making this up.)

In the Iraqi desert two Army soldiers, Sgt. Nick Morton (Cruise) and Cpl. Chris Vail, discover the tomb, and Nick unknowingly sets the sarcophagus free, linking him with Ahmanet. Along with archaeologist Jenny Halsey they fly the sarcophagus back to England. Chris had been bitten by a spider in the tomb, and now, a slave to Ahmanet’s will, he begins stabbing others on the plane. When he threatens Nick and Jenny, Nick shoots him dead.

As the plane reaches England it is attacked by a huge murder of crows. Nick manages to put a parachute on Jenny and push her out before the plane crashes, killing everyone aboard—including Nick…or so it appears.

THIS IS YOUR LIFE 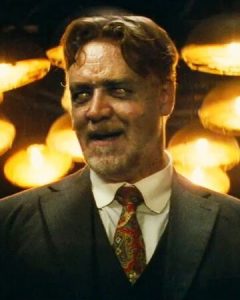 Nick startles awake in a morgue and breaks out of a body bag, not a scratch on him. (I’m not making this up.) He first encounters the dead Chris (Nick is the only one who can see him), then Jenny. Ahmanet apparently brought him back to life to serve as the vessel for Set, so says Chris, which does not make Nick a happy camper.

After an unpleasant encounter with a walking corpse and an army of rats, Nick goes with Jenny to the site of the plane crash. Ahmanet had brought the plane down near the church when the Dagger of Set had been hidden. She has since mostly regenerated herself by sucking the life force from a number of First Responders, and now, after finding the dagger, she attempts to kill Nick. But without the ruby she is unsuccessful.

Nick and Jenny do battle with Ahmanet and the walking corpses that she has reanimated. A goon squad from Prodigium arrives in the nick of time (no pun intended) and captures the princess. Are these the good guys? If so, why do they shoot Nick with a tranquilizer dart? 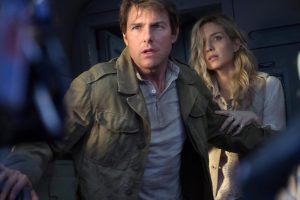 Nick and Jenny are menaced by a whole lot of dead folks.

Okay, I’ll stop here. There is a lot more to come, but I think you’ve got the picture. The Mummy is just a hokey as it sounds, but what the heck is wrong with a little escapism? This film was supposed to be the first in Universal Studios’ Dark Universe series—modern remakes of old horror classics such as Frankenstein, The Wolfman, Dracula, and others. But given the poor box office the second installment, Bride of Frankenstein, has been shelved. That is a shame; it would have been a fun series—and we could all use a bit of fun these days.