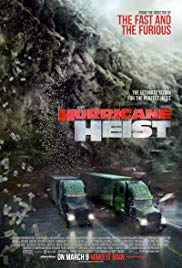 Negative reviews? Crummy box office? Oh yes, the 2018 action/disaster film, The Hurricane Heist, is definitely a world-class Guilty Pleasure. Some critics even agreed that it was the “Best/Worst” movie of the year—which likely makes it a Guilty Pleasure even for them. But either way, I don’t care, because I enjoyed the heck out of it. Here is a brief plot teaser.

THE STORM OF THE CENTURY…THE HEIST OF A LIFETIME

With that ambitious tagline, the story opens in 1992 Gulfport, Alabama during category 5 Hurricane Andrew. Young brothers Will and Breeze Rutledge watch in horror as their father is killed by the raging storm.

Fast forward twenty-six years. Will is a meteorologist, Breeze a maintenance guy. Another hurricane is approaching Gulfport, and Will, monitoring the storm from his tricked out SRV, believes it has category 5 potential, but his superiors aren’t buying it. The town happens to be the location of a Federal Reserve facility, one where they shred old bills—always a temptation, yes? 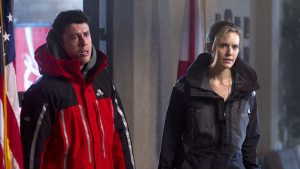 Will and Casey learn that the sheriff is not on their side.

Federal agents Casey Corbyn and Connor Perkins arrive at the facility with a truckload of money. With the power out, Casey leaves to pick up Breeze, who services the generator. Before she heads out, Casey enters a new code for the main vault.

Perkins turns out to be the leader of a band of mercenaries bent on taking $600 million from the facility. They imprison all of the guards as a couple of hackers work at opening the vault. But with the code changed, they’re going to need Casey to crack it.

Will has stopped at Breeze’s shop to warn him that the storm is going to be a bad one, and that he’d better get outta Dodge. Casey arrives as they’re boarding up the shop, and Breeze goes with her. As they reach the facility they are attacked by some of the mercenaries, and Casey shoots it out with them. She escapes, and is subsequently picked up by Will, but Breeze is captured and forced to work on the generator.

“YOU IN A HEAP’A TROUBLE, FOLKS” 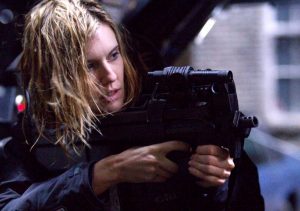 Casey can take care of herself.

With the storm now lashing the town, Will and Casey head for the sheriff’s office to report the heist in progress. Turns out good ol’ boy Sheriff Dixon is in on the robbery, along with his deputies. Following another shootout they manage to escape, with Dixon in pursuit. Casey wounds Dixon during the chase, and Will disables the sheriff’s car with his bad-ass SRV.

The hackers, still at it, are using a “brute-force attack” to decrypt the code, and they’re getting close. But Will, realizing that they’re making use of the town’s transmission tower, manages to topple it, with Casey’s help. Now, the bad guys are out of options. They absolutely need Casey to enter the new code.

Dixon and his deputies show up at the facility and confront Perkins, demanding more of the money. Perkins kills the sheriff and takes control of the deputies by promising them a bigger cut of the $600 million. Since they know the town, they’re tasked with finding Casey and killing Will. 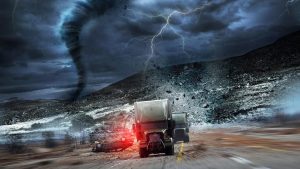 The hurricane is raging now as Will and Casey take refuge in the town’s only mall. Will hatches a plan that includes using the storm to their advantage. He tells Casey to contact Perkins via walkie-talkie and offer a trade: she’ll give them the code in exchange for Will’s brother, the transaction to be consummated at the mall. Casey, who likely thinks that Will is out of his mind, makes the call…

I’ll stop here. There is plenty more to come, including some of the film’s most exciting—and over-the-top—scenes. The Hurricane Heist is far from the best movie ever made, but it is also equidistant from the worst. It’s a fun flick to view on a dark and stormy night—as long as that stormy night does not include a category 5 hurricane. 😊