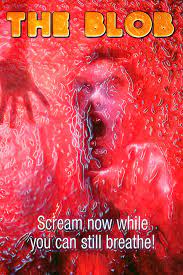 Whether you’re a casual or serious fan of horror/sci-fi films (I’m the latter), you probably associate The Blob with the classic B-movie from 1958. After all, it was Steve McQueen’s first starring role. In subsequent years it produced a few sequels, but the first remake came about in 1988. Not a bad film, IMHO, and its reviews were halfway decent, but it turned out to be a major—and I mean really major—box office bomb. Hence, a Guilty Pleasure.

TERROR HAS NO SHAPE

With that tagline, here is a brief overview of The Blob, which took gross-out special effects to a whole new level. Like its predecessor, it opens with a meteor plummeting into a forest near a small town in Northern California. An old man finds the object and pokes around it, until a small, slimy Blob attaches itself to his hand. Three teens, Meg, Paul, and bad boy Brian, take the guy to a hospital. Brian leaves, but Paul finds the old guy half devoured by the Blob, which now, much larger, falls from the ceiling and dissolves the poor kid. Naturally, this ruins Meg’s first date with Paul, and also traumatizes her. 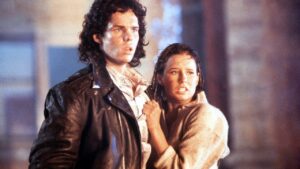 Brian and Meg know that their town is in some serious shit.

Meg reunites with Brian, and they try to warn the town, but to no avail. The Blob, growing larger with each “meal,” slithers through town as it partakes of the smorgasbord. Meg and Brian flee the town in search of the sheriff but discover a bunch of military guys in biohazard suits. The Blob, it seems, is a prototype biological weapon that was shot into orbit and became mutated from outer space radiation. (I’m not making this up.) The mad scientist in charge wants to quarantine the town to prevent anyone from learning about the Blob’s origins, and if it means human casualties, so be it.

So it’s up to Meg and Brian to expose these assholes and warn the town, as well as to find a way to destroy the Blob, which is now about the size of the Chrysler Building, and real hungry. The movie theater scene from the 1958 film is recreated to a point as Meg tries to save her kid brother and his buddy from the Blob’s clutches. 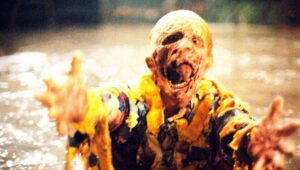 The Blob dissolves this poor kid.

You’re right, I’m making light of The Blob, but I assure you the story is not played for laughs. Meg’s transformation from a high school cheerleader to a kick-ass heroine is worth the price of admission. I watch this film every few years, and will do so until the Mother Ship comes for me. 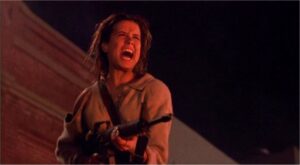 Meg is really pissed at The Blob.