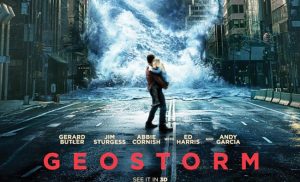 With that tagline—one of many—here is a brief overview of Geostorm, which stars Gerard Butler—one of my favorites. With climate change causing catastrophic disasters around the globe, an international coalition commissions a series of climate-controlling satellites, collectively known as Dutch Boy. (Hole in the dike…get it?) The chief architect, Jake Lawson (Butler), heads a team that controls the satellites from the International Climate Space Station (ICSS). When he brings the system online early without authorization, saving Shanghai from a killer typhoon, he is reprimanded and replaced by his estranged brother, Max, an assistant to the U.S. Secretary of State. (Jake sucks at politics.) 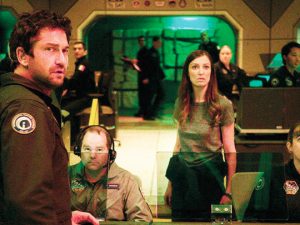 Is there a saboteur on the space station?

Fast forward three years, to 2022. The people in a village located in a blazing Middle East desert are found frozen to death, while increasing temperatures in Hong Kong cause deadly underground gas explosions. At the same time, an engineer on ICSS is killed in an alleged accident, having apparently discovered something about which he needs to warn the powers that be.

Tasked with finding out what is going on, Max approaches his brother, who knows more about Dutch Boy than anyone. Jake, doing his hermit thing in Florida, tells Max where he can go. But when they realize that continued malfunctions could potentially cause a cataclysmic global event called a Geostorm, Jake agrees to go—if only because he is concerned about his preteen daughter, Hannah. 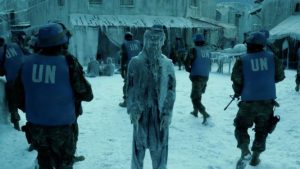 Frozen to death…in the middle of the desert.

As Jake encounters resistance on ICSS—an attempt is almost immediately made on his life—Max becomes suspicious of a conspiracy on Earth to cause these malfunctions. He reluctantly enlists the help of his fiancé, Sarah Wilson, a Secret Service agent assigned to protect the President. Why? Because the conspiracy, he believes, may extend to the highest reaches of the government. (A surprise, huh?)

Sure, this whole storyline may be a bit difficult to believe. But hey, Geostorm is just a movie, and it is Hollywood at its excessive best, so just view it without trying to analyze it. Its nearly two hours go by quickly, with plenty of edge-of-your-seat action.