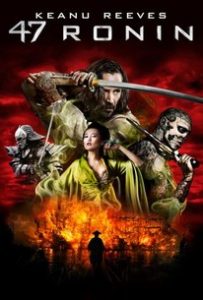 By my own checklist the 2003 historical adventure-fantasy film, 47 Ronin, is the perfect Guilty Pleasure. It bombed at the box office: check. Critics hated it: check. Yours truly loved it: double check.

The film is based on actual events, which took place in eighteenth-century feudal Japan. Forty-seven Samurai were proclaimed outcasts (ronin) by the country’s ruler, the Shogun, after the provincial lord that they served was executed. Their subsequent actions—one of the key elements of the film—are honored to this day in Japan.

The film, which stars Keanu Reeves, has stunning visuals, great action sequences, and maybe just a bit of cringe-worthy dialogue. It runs just over two hours, so what I’ll do here is offer a brief overview of the first half. 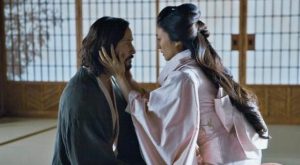 Reeves portrays Kai, the son of a British seaman and a Japanese peasant girl. As a child he was abandoned in the haunted Sea of Trees, Japan’s Suicide Forest, where he was raised by “demons,” the tengu. (I have written extensively about this forest, also known as Aokigahara. Check out my post, “Myths And Legends: The Angry Ghosts Of Japan’s Suicide Forest.”) He fled the forest as a teen, wanting to be with his own kind. But his “own kind” treat him like crap, calling him “half-breed” and threatening to kill him. Only the kindness of Lord Asano of the Ako province, and his daughter, Mika, spares him. He and Mika will eventually fall in love. Still, he lives like an outcast.

The ruler of a neighboring province, Lord Kira, is a covetous asshole who wants to add Ako to his domain. He sends a huge beast to kill Asano, whose Samurai seem overwhelmed when they attempt to stop the monster. Kai, who was permitted to accompany the Samurai as a flunky, winds up killing the beast and allows one of the Samurai to take credit for it. He also spots a white fox with two oddly colored eyes. This is Mizuki, a shapeshifting witch employed by Kira. She had summoned the creature.

The Shogun comes to Ako for a planned visit. Other provincial lords arrive, including the nasty Kira. When Kai spots one of the Shogun’s concubines with multi-colored eyes, he realizes that it is the witch that had appeared in the forest as a fox. He tries to warn Oishi, the head Samurai, but he is blown off. 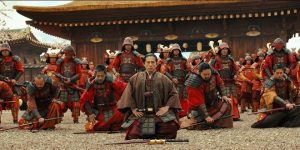 The 47 Samurai, soon to be outcasts.

A duel is planned for the Shogun’s entertainment. One of Kira’s men will fight a Samurai from Asano’s guard. When the latter is incapacitated by Mizuki, Kai puts on his armor and takes his place. During the battle his disguise is revealed, and the Shogun orders the Samurai to beat the crap out of him. Later, Mika will tend to his injuries.

That night, Mizuki uses more magic to bewitch Lord Asano and make him believe that Kira is raping his daughter. He attacks the unarmed Kira, and for his transgression the Shogun orders his death. Because of his lifelong service to the Shogun, Asano will be allowed to die with honor by seppuku (ritual disembowelment). Mika is forced to watch her father die, after which the Shogun orders her to marry Kira and unite their two provinces. Mika will be allowed one year of mourning. Oishi and the other Samurai are branded ronin and are forbidden by the Shogun to seek revenge for their lord’s death. 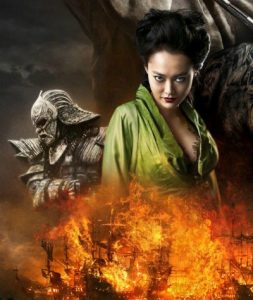 Mizuki the shapeshifter is one evil witch!

But that is not good enough for the vile Kira. He has Oishi cast into a deep pit, and his men take Kai to a distant Dutch colony and sell him into slavery.

Okay, enough said. Is that a great setup for all that will occur one year later? I will mention one thing: we will be taken into Kai’s “old haunts,” the creepy Suicide Forest, and we’ll meet many of its “inhabitants.” What will happen there? You’ll see. It is my favorite scene in the film.

Okay, 47 Ronin isn’t everyone’s cup of sake. But the audience poll on CinemaScore rated it a B+, which proves there are more easily entertained people like me out there. Enjoy!