Films About Books: The Bookshop

Book lovers are special people. (Yes, I’m biased, but what the heck.) The theme is especially prevalent in the 2017 drama, The Bookshop. The film, a period piece set in England, has an impressive cast that includes Emily Mortimer, Bill Nighy, and Patricia Clarkson. It is based on a novel by Penelope Fitzgerald.

A TOWN WITHOUT A BOOKSHOP IS NO TOWN AT ALL

With that tagline, and no spoiler alert, here is a brief synopsis. The year is 1959. Middle-aged widow Florence Green (Mortimer) has moved to a small coastal town called Hardborough. Florence’s late husband passed away sixteen years earlier. Both of them book lovers, they had met in—where else?—a bookshop. She has been adrift since his death.

Now, to fulfill a dream, Florence has purchased a run-down, long abandoned building known to the locals as Old House. She plans to renovate it, live in it upstairs, and turn the first floor into a bookshop. The locals think she’s balmy. One man tells her that no one in town reads books, with maybe one exception: an elderly recluse named Edmund Brundish (Nighy). Still, Florence forges ahead with her plans. 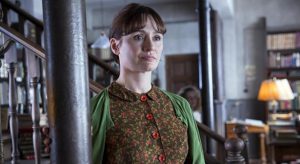 Florence has fulfilled her dream.

LET’S HEAR IT FOR RAY BRADBURY!

Prior to the opening of her shop, Florence meets rich bitch witch Violet Gamart (Clarkson), who is under the impression that Old House will be turned into an art center, with the new owner managing it. No, it is going to be a bookshop, Florence says, and she tells Violet to piss off—in a nice way. It is quite clear that Hardborough’s newest arrival has made an enemy of the town’s long-time doyen. 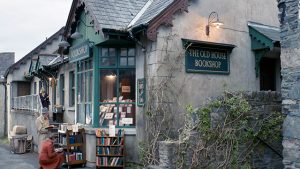 The Old House Bookshop soon opens, and despite the naysayers Florence does quite well. She is able to hire a helper, a feisty pre-teen named Christine. As predicted, Florence’s best customer is old Mr. Brundish, though he never sets foot in the shop. He sends Florence a note asking her to have a messenger bring him a few books at a time, ones that she recommends. He will pay for the ones that he keeps and send the others back. A weird arrangement, to be sure…but Florence complies.

One of Florence’s recommendations is a novel called Fahrenheit 451 by an author with whom Mr. Brundish is unfamiliar: Ray Bradbury. (I love this!) The book resonates with him, and he requests everything that Bradbury has published at that point. He even pre-orders Bradbury’s forthcoming book, Dandelion Wine. He eventually invites Florence for tea at his house, which holds a gazillion books, and despite their initial awkwardness they become good friends. Later on Mr. Brundish will become her strongest advocate.

All the while, nasty old Violet has been doing all she can to see Florence fail, so that she can acquire Old House and turn it into her stupid art center. Invoking some kind of child labor law, she is able to have the authorities see to it that young Christine can no longer work at the bookshop. Florence and the girl had grown quite close, and they are both devastated.

But Violet doesn’t stop there. The old witch has a nephew in Parliament, and she convinces him to sponsor a bill that will allow local governments to buy any historic buildings that have not been in use for five years—apparently retroactive. When the bill passes, it is evident that the town of Hardborough (read: Violet Gamart) will forcibly purchase Old House from Florence and put her out on the street.

When Mr. Brundish learns of this, he tells Florence that he will confront the witch and insist that she back off. This gentle book lover is really pissed, so off he goes…

And I will leave you here, with no spoiler, as promised. The most compelling scenes are yet to come. The Bookshop, which was nominated for numerous awards in Europe, is a slowly paced, beautifully filmed production that book lovers and casual readers alike will appreciate. The performances by the veteran cast are top-notch. Enjoy!