Cruising Through The MonsterVerse: Part Two

Legendary Pictures’ MonsterVerse almost ran out of steam with the lack of success of its third entry. Fortunately, the fourth film in the series bailed it out. So does that mean the franchise will continue? Read on.

This third entry seemed a cinch to be successful. I mean, they were bringing back some of the giant reptile’s contemporaries from Japan’s Toho studio, all favorites from when I was a kid. I’m talking Mothra, Rodan, and the three-headed King Ghidorah, aka Monster Zero, not to mention a bunch of new Titans. What could go wrong? 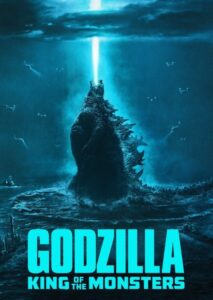 Unfortunately, just about everything. The film underperformed at the box office, and its approval rating on Rotten Tomatoes was 42%, the lowest in the franchise. At least it fared well with audiences—not that this matters to studios that lose millions on duds.

Brief overview: Dr. Emma Russell (Vera Farmiga), a paleobiologist working for Monarch, and her daughter, Madison (Millie Bobby Brown), witness the emergence of Mothra’s larva using Emma’s device that can control Titan behavior. They are then seemingly kidnapped by violent eco-terrorists, led by ex-British military officer Alan Jonah. Actually, Emma and Jonah are working together to resurrect all the Titans and “restore balance to the planet.” Madison will soon become aware of this and tell Mom to shove it.

The Monarch team from the first film recruits former employee Dr. Mark Russell (Kyle Chandler), Emma’s ex, to help track down Jonah and Emma. Maybe Godzilla can help, they say. But Mark hates the giant reptile, whom he blames for the death of his and Emma’s son during the incident in San Francisco five years earlier. He finally gets on board, and they arrive at Jonah’s Antarctica base, where he and Emma have just resurrected Monster Zero, a prehistoric alien also known as King Ghidorah. The Titans battle briefly for the first time, after which King Ghidorah hits the road. 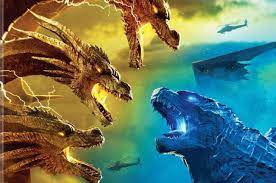 More Titans are resurrected around the world, and we bear witness to a number of titanic battles before all roads lead to a monstrous climax in Boston, with all of the creatures descending upon Fenway Park. (I’m not making this up. Maybe they were hoping to catch a Red Sox game.) Madison, Godzilla, and Mothra have become the heroes by this time. Enough said.

To echo my gripe from the first film, much of Godzilla: King of the Monsters is shot in smoke, or haze, or at night, or underwater. Still, the kid in me loved seeing so many monsters in one movie. (Right, I’m easily entertained.) And a post-credits scene did promise a direct sequel. 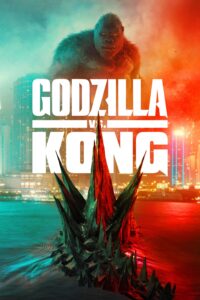 But something gnawed at me, as I imagine it did with many others. In all of their prior appearances Kong and Godzilla had been the good guys, so why would they clash with each other? And how would we feel if one killed the other? All I will say is that, fortunately, it did not come to that. 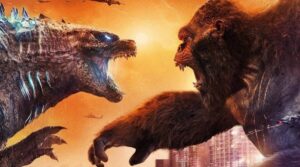 Do these guys really hate each other?

I could not do Godzilla vs. Kong justice with a brief overview, so I’ll try to keep this even briefer. Godzilla is doing some un-Godzilla-like things, and no one is sure why, but Madison Russell, a bit more grown up, is on the job to try and discover what is causing the reptile’s erratic behavior. Kong is recruited to lead an expedition into the Hollow Earth, where an unlimited power source sought after by a mega-rich guy (yep, corporate greed rears its head) is said to exist. And a new danger, the technically advanced Mechagodzilla, just might bring two ancient enemies together to (deep breath) save the world, or at least the city of Hong Kong.

So is there a future for the MonsterVerse? Earlier this year it was reported that Apple TV+ has ordered a live-action MonsterVerse series, and a sequel to Godzilla vs. Kong is supposed to begin filming in Australia later this year. Okay, I’m happy. Long live the MonsterVerse!