With the financial success of the first two films in the Conjuring Universe, sequels were inevitable. This time around the filmmakers doubled down on the links that they inserted in The Conjuring 2, a clear indication that this franchise had a lot more to offer in the future.

The primary focus of this film is the incident in England that came to be known as the Enfield Poltergeist. Vera Farmiga and Patrick Wilson reprise their roles as Lorraine and Ed Warren, and the film opens at a séance in the infamous Amityville house. Lorraine enters a vision in which she follows the young man who killed six family members, the on-screen results being quite gory. Down in the basement she has her first encounter with a demonic nun figure, which becomes link number one. (Or number two, if Amityville becomes part of the Conjuring Universe, which I doubt, given the numerous films already in that franchise.) In this part of her vision Lorraine witnesses Ed’s death via impalement.

In the London suburb of Enfield the Hodgson family, a single mother with two sons and two daughters, begins experiencing paranormal activity after Janet, one of the daughters, plays with a Ouija board. A pissed-off old guy appears in a living room chair and insists that the house is his. He had lived—and died—there years earlier. Other terrifying events eventually drive the family out of the house to their neighbors’ place across the street.

The creepy nun makes her debut in this film.

Before they become involved in the Enfield incident, Lorraine has another vision of the nun, this time in their home. (Seriously creepy scene!) Lorraine, fearing for Ed, doesn’t want to go to England, but Ed feels obligated to help the Hodgsons.

The ghost of the old man is creepy enough, but as the Warrens immerse themselves in the case, it becomes evident that a demon—in the form of the nun—is trying to enter this world by possessing Janet Hodgson. This “battle” for her soul comprises the balance of the film, and I’ll leave it at that, other than to mention a zoetrope toy of the Crooked Man that belongs to one of the boys. This creepy figure makes a brief appearance, but (link number two) he’ll be around for a future film. The Conjuring 2, while not as high on the Scary-As-Hell index, will give viewers some uneasy moments.

This prequel to Annabelle, which critics found superior to the first film, opens with dollmaker Samuel Mullins and his wife, Esther, dealing with the accidental death of their daughter, Annabelle. Fast forward a dozen years to the couple opening their home to a nun and six girls who had been left homeless when their orphanage closed. Janice, a sweet girl disabled by polio, is lured into Annabelle’s old bedroom, where she finds the creepy doll that the Mullinses had locked away. This unleashes a demon, which possesses Janice. Suddenly she can walk, and whoa, does she embark on a path of destruction!

Ultimately, Janice will make her way to a California orphanage, where she will call herself Annabelle and will ultimately be adopted by a couple named Sharon and Pete Higgins. Yes, the end of Annabelle: Creation is the seamless opening of Annabelle. Like its predecessors, this film did great at the box office, making it a strong entry in the Conjuring Universe.

A prequel about Lorraine Warren’s creepy, evil nun was inevitable. The story takes us to Romania, where two Roman Catholic nuns at a monastery enter a tunnel looking for an ancient relic. They are attacked by a demon in the form of a nun, one of them killed on the spot, the other eventually hanging herself. 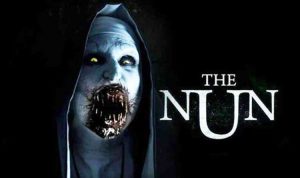 Learning of the incident the Vatican sends a priest, Father Burke, and a novitiate, Sister Irene, to Romania, where they will be tasked with finding out what is happening at this ancient, ominous monastery. As you can guess, they’ll find that they have bit off more than they can chew as they do battle with this Nun From Hell.

I found enough scares in The Nun to keep me entertained—but as I’ve mentioned before, that’s not hard to do. Once again this entry in the Conjuring Universe made plenty of money, and it will likely spawn a sequel. But of the seven films to date, this one rated the lowest by critics and audiences alike.

We’ll conclude the series next week with the two most recent entries in the Conjuring Universe, and also have a look at the future of the franchise. I, for one, am pleased to see it continue—but to reiterate, I’m easily entertained.