The most recent films in the Conjuring Universe both hit the silver screen in 2019 and are already available in DVD/Blu-Ray. Film number six, The Curse of La Llorona, fits into the franchise primarily by virtue of it being created by the same studios. Its only link to the other films is the character of Father Perez, who appeared briefly in Annabelle and tried to help the Forms get rid of the blasted doll, which he makes reference to in this film. That’s it.

There is a legend, true or otherwise, of a woman who lived in seventeenth century Mexico with her husband and two children. When she caught hubby cheating on her, she went mad and drowned the kids. Ultimately, realizing what she had done, she killed herself. Her tortured spirit, known as La Llorona (the Weeping Woman), walks the Earth to this day trying to get her children back—and, of course, killing those that belong to other parents.

The Weeping Woman is rather creepy…

In 1973 L.A. caseworker Anna Tate-Garcia, a young widow with a son and a daughter, is investigating the disappearance of two little boys, the children of her client, Patricia Alvarez. She finds the boys locked in a closet, the mother seemingly crazed, and she puts them in protective custody, even though the boys are terrified to leave the closet. They have good reason to be, because that same night, at a seemingly safe shelter, La Llorona comes for them. They are discovered soon after, drowned in a nearby river.

Anna had to wake her kids in the middle of the night to get to the scene, and while the children wait in the car, the distraught Patricia blames her for not protecting them from La Llorona. Naturally, the Weeping Woman appears and menaces Anna’s kids, which becomes the start of her long nightmare throughout the majority of the film. Ultimately she will seek the help of Father Perez, who will refer her to a rather, uh, unorthodox faith healer.

The Curse of La Llorona is far from the best or worst horror film that I’ve ever seen, though it had its share of frights. Its reviews were not great, but like all of the other films in the Conjuring Universe it did well at the box office. 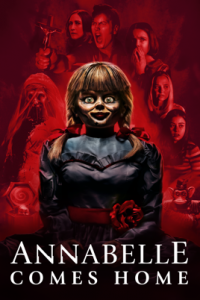 Remember when Lorraine and Ed Warren took the creepy doll and put it in their artifacts room? Well, this film shows us that on the drive home sweet little Annabelle—or whatever the devil is inside it—tries to kill Ed. He survives, and the doll is locked up in the sacred glass cabinet.

Flash forward a few years. The Warrens’ daughter, Judy, is now a preteen. With Lorraine and Ed headed out of town overnight to investigate a case, Judy’s babysitter, Mary Ellen, comes to the house to stay with her. Mary Ellen’s friend, Daniela, also shows up.

Daniela knows about the Warrens and is curious about the artifacts room. With the others distracted, she manages to find the keys and opens the room. She hopes that some of the items contained there will help her contact her deceased father. Wrong-o! Everything goes to Hell—literally—when she leaves Anabelle’s case open. And therein lies the balance of the film. 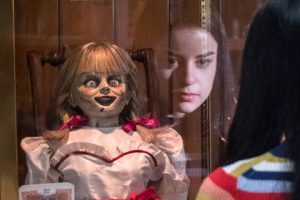 Crap, don’t let her out!

Annabelle Comes Home received pretty solid reviews, and of course made money. Yes, I enjoyed it, though with the Warrens appearing only briefly at the beginning and the end, the film had a sort of “dumb teen slasher” feel to it, given the cast. Maybe that’s just me. In any case, it is definitely a strong entry in the Conjuring Universe.

Film franchises only run out of steam when the entries stop making money, and so far that has not happened. The Conjuring 3 is a given. It is already in production, and it is scheduled to be released in September 2020. Vera Farmiga and Patrick Wilson will reprise their roles as Lorraine and Ed Warren, and if the first two Conjuring films are any indication, I’ll probably need to keep a dry pair of shorts close at hand.

Beyond that, a sequel to The Nun is farther along in development, though no release date as yet. And a spin-off from Conjuring 2 about the Crooked Man from the zoetrope toy is also being considered, though any development is in the earliest stages. His appearance was one of the creepiest scenes in the film, so I like the idea of him having his own venue.

So, more power to the Conjuring Universe! My bride is not into horror movies, so I usually watch them with headphones on, and when they’re over I tell her, “Okay, that scared the living crap out of me!” Hopefully she’ll be hearing that for a long time to come.