Conjuring Up A Scary Universe: Part One

Having viewed over 17 million horror movies since the invention of celluloid, I’m pretty jaded when it comes to being scared by any of them. But I just about had to change my shorts after watching the 2013 thriller, The Conjuring. If it isn’t the scariest movie I ever saw, then it’s at least in the top three or four. The fact that it evolved into a “universe” of seven films—and counting—did not surprise me in the least. To date, the franchise has grossed a bit under $2 billion (with a “b”).

THE DEMONOLOGIST AND THE PSYCHIC

The stories are all “inspired by true events,” specifically from the case files of paranormal investigators Lorraine and Ed Warren. Ed, who passed away in 2006, called himself a demonologist. Lorraine, who died earlier this year, was a psychic and medium. Together they claimed to have investigated thousands of hauntings and demonic possessions, most notably the Amityville house on Long Island (1976) and the Enfield poltergeist in England (1977). Skepticism about their work abounded all through their lives, especially regarding Amityville, which many debunked as a huge hoax. Still, that house created its own universe of seventeen films.

The timeline of the seven films ranges from 1952 to 1977, but they were not released in that order. I’m going to present an abstract of each film in the order that they hit the big screen, with the date of the events in parentheses.

According to Lorraine Warren, the work that she and Ed did for the Perron family was arguably the most challenging of their careers. Lorraine served as a consultant for The Conjuring, which starred Vera Farmiga and Patrick Wilson. Subsequent reviews noted that their on-screen chemistry as the Warrens is a prime reason for the franchise’s success. I totally agree with that assessment.

The film opens with a great marketing ploy that ultimately paid off big-time. The Warrens are consulting with two young women, roommates, who have in their possession a seriously creepy-looking porcelain doll called Annabelle. The doll has been moving around the house on its own, writing messages in crayon, and in general creeping the women out. The Warrens take the doll to their artifacts room, where they have “souvenirs” of other cases, and lock her up in a sacred cabinet. A priest comes to bless this room weekly and contain the evil. Annabelle will be back.

Carolyn and Roger Perron, along with their five daughters, move into a huge house in rural Rhode Island. Right from day one they are seriously haunted. Every clock in the house stops at 3:07 a.m. Their dog, which refused to go inside, is found dead the next morning. Birds fly into the house and kill themselves. Weird noises abound. When spirits begin to appear and terrorize the children, Carolyn calls in the Warrens. 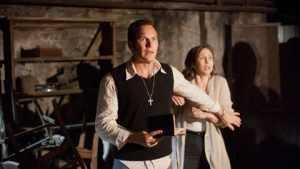 The Warrens may have bitten off more than they can chew.

Lorraine is overwhelmed by the entities in the house, and Ed petitions the church for an exorcism. Research turns up the fact that the house was once owned by an accused witch named Bathsheba Sherman a century and a half earlier. This woman sacrificed her infant to the devil at 3:07 a.m. before killing herself. Now, she is aggressively trying to steal Carolyn’s soul, and she’s getting pretty darn close to succeeding as Carolyn attempts to kill her youngest kid. Bathsheba even attacks the Warrens’ daughter, Judy, in their home, using Annabelle as a conduit.

Enough said; as mentioned, The Conjuring scared the crap out of me, and it did the same for audiences and critics alike. If you viewed it, you know what I mean. 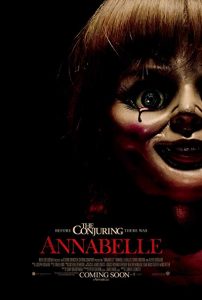 The Warrens are only mentioned in passing later in this film. A young couple, John and Mia Form, live in a quiet L.A. neighborhood. John, a doctor, presents his pregnant wife with the Annabelle doll. Mia, a serious collector, is thrilled to have it.

A middle-aged couple, Sharon and Pete Higgins, live next door. One night their estranged, adopted daughter, Annabelle (yep, that’s correct), shows up with a Manson-like cultist. They kill her parents then are drawn to the Forms’ house, where they injure Mia. The police blow the guy away as Annabelle commits suicide, though not before transferring the essence of the demon that has long possessed her into the doll.

As the Forms try to move on, a series of increasingly dangerous mishaps convinces Mia that the Annabelle doll is cursed. When a fire nearly kills her, John tosses the doll into the trash.

Fast forward a few months. Mia has given birth to a girl, and the Forms have moved into an apartment in Pasadena. As they unpack boxes, they discover the Annabelle doll. How was that possible? John wants to get rid of it again, but Mia decides to keep it. Oh, big mistake!

Mia can’t decide if she needs to get rid of Annabelle. Duh…

Needless to say, the nightmare events that subsequently overwhelm Mia and John escalate throughout the rest of the film. Ultimately, Annabelle will wind up for sale in an antique shop, where a woman will buy it as a gift for her daughter—one of the young women from the opening scene in The Conjuring. Yes, another link.

Critics were not as kind to Annabelle, mostly because they compared it to the outstanding first film. But it had some chops on its own, and quite a few uneasy moments. We’ll move forward with more of The Conjuring Universe in next week’s post.