Blowing Shit Up: The “Fallen” Films 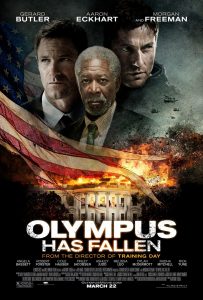 As I’ve said before, we guys have it in our DNA to enjoy movies where they’re blowing shit up, whether it’s Mother Nature doing the blowing, or via the good old American way with lots of bombs and other ordnance. The three “Fallen” films, all starring Gerard Butler, definitely fall into the latter category.

Butler portrays Mike Banning, a former Army Ranger now serving as a Secret Service agent protecting the president. He has a friendly relationship with President Asher (Aaron Eckhart), his wife, and their son Connor. On a snowy evening, as the detail drives from Camp David, the president’s car spins out of control on an ice-covered bridge. Banning manages to save Asher, but the First Lady is killed.

Over a year later Banning, blaming himself for the First Lady’s death, is no longer with the Secret Service. He holds down a desk job with the Treasury Department. Asher is hosting a South Korean contingent when a terrorist group from North Korea attacks the White House from both the air and the ground. Shit begins blowing up big-time as Asher, some of his chief aides, and the South Koreans are hustled down to the bunker below the White House, which is now occupied by the terrorists. 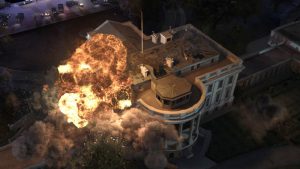 But the terrorist leader, Kang (sounds like a Klingon), had worked his way onto the South Korean prime minister’s security team and, after executing the PM, holds Asher and the others hostage. His demands include the withdrawal of the U.S. Seventh Fleet from the Korean peninsula, as well as the access codes to the nuclear arsenal. He is negotiating with Vice President Trumbull (Morgan Freeman), now Acting President.

Mike Banning, seeing all the shit blowing up from his office window, hurries to the White House and becomes a one-man wrecking crew (all of the other agents have been killed) as he first attempts to save the president’s son, then Asher himself. Needless to say, shit continues to blow up non-stop as Banning makes his way through the decimated Olympus—the code name for the White House.

Typically, film critics went “meh” for Olympus Has Fallen, while audiences loved it. And since it made a good chunk of change, a sequel was inevitable. 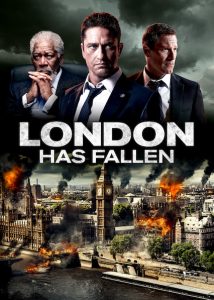 This time the terrorists come from Pakistan. Seems that the British Prime Minister has died quite unexpectedly. (He was murdered.) With a state funeral in order, world leaders are gathering in London, their security details scrambling to make sure they’re protected. Mike Banning, back in charge of the president’s Secret Service detail, has some well-founded concerns as shit starts blowing up all over the city. Some of the Western leaders are killed as a number of London landmarks fall. Banning, along with Secret Service Director Lynne Jacobs (Angela Bassett), manage to escape on the Marine One helicopter.

Air Force One had flown into a remote airfield. As Marine One makes it way there, its escorts are shot down by the terrorists. The helicopter crash lands in Hyde Park, killing Jacobs. Banning and President Asher, now on foot, race through the streets of London on their way to an MI6 safe house as shit continues to blow up all around them. Ultimately the terrorists will capture the president, and it will be up to Banning to rescue him. Wait till you see how much shit blows up during the film’s lengthy climax.

London Has Fallen was even more reviled than its predecessor. One critic began his review by calling it “A murky, brain-dead stab-a-thon…” But once again audiences loved it, and it grossed even more money than the first film. So again, a sequel had to be made.

Having twice saved President Asher’s butt, the filmmakers decided against a trifecta. Former Vice President Trumbull (Morgan Freeman) is now the prez, and Mike Banning is his favorite agent. He’s even considering a promotion for Banning to Director of the Secret Service. 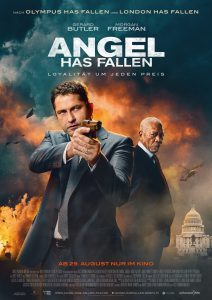 But a for-hire military organization headed by Wade Jennings, an old friend of Banning, considers Trumbull too much of a dove when it comes to dealing with Russia. They expect to land a lucrative contract if the U.S. goes to war, and they’ll do anything to secure it. During a presidential fishing trip they launch a massive drone strike, killing the entire Secret Service detail save one: Mike Banning, who manages to save Trumbull. Shit blows up all over the lake and the shore before Banning and the president, who is in a coma, are taken to a hospital.

The FBI wonders how Banning survived the assault, ultimately charging him with treason when a number of clues surface indicating him to be the perpetrator. This includes a $10 million deposit in an offshore account. As he is transported from the hospital to a detention facility, the bad guys “rescue” him. Amid more shit blowing up, Banning recognizes some of the rescuers and realizes that Jennings has set him up. He sets out to clear his name and prevent the hawkish vice president, now the acting president, from initiating a war with Russia.

Banning travels to a supposed safe house belonging to his estranged survivalist father, Clay (Nick Nolte). Jennings manages to track him there and sends in his troops, but the paranoid Clay sets off a ton of ordnance surrounding his cabin. During this Blowing-Up-Shit-Fest the mercenaries are all killed, and Banning flees with his dad. 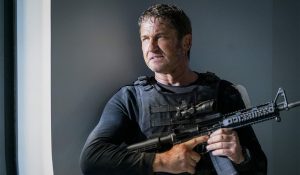 You don’t want to piss off Mike Banning…

Needless to say, a lot more shit will blow up before this one ends. Angel Has Fallen might just lead the league in Blowing Shit Up, but hey, isn’t that one of the main reasons we’re watching these films? Critics were still brutal, and audiences still loved it. Its box office was not that impressive, but enough for the series producer to announce that three more films, plus a TV series, was on the drawing board. I guess we haven’t fallen for the last time, which is okay by me.