Blowing Shit Up: PREDATOR And PREDATOR 2 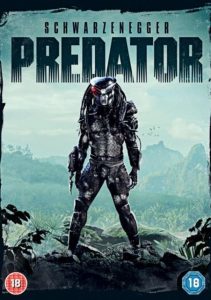 Each of these two movies, the classic Predator (1987) and the not-so-classic Predator 2 (1990), features a single antagonist—a nasty-looking dude with dreads. So why, one would wonder, does it take an ungodly amount of blowing shit up to bring these alien hunters down?

Back then, when Arnold Schwarzenegger starred in a film, you could rely on one of two things: a high body count or lots of shit blowing up. Or both. In Predator Arnie plays Dutch, a bad-ass who leads an equally bad-ass bunch of guys comprising an elite military rescue team. They are tasked with rescuing a couple of politicians held hostage by insurgents in a Central American jungle. A CIA guy named Dillon (Carl Weathers; yeah, Apollo Creed) accompanies them.

It doesn’t take long for things to go horribly wrong. They discover the remains of another squadron, which had been sent in earlier, hanging from trees, all of them skinned alive. Gross! 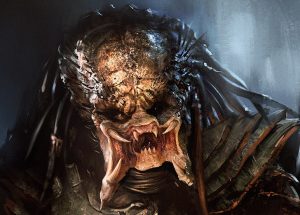 But they follow through with their mission by attacking the guerrilla camp, and a whole lot of shit blows up for the next ten minutes or so. All the while they are being watched by the camouflaged Predator, who can only see things through thermal imaging.

With the mission a failure they head for their extraction point with the only survivor, a guerrilla named Anna. The Predator stalks these warlike creatures, ripping out their spines and taking their heads as trophies. As their numbers diminish one by one, the team finally becomes aware of what they’re up against. They set up traps with every imaginable ordnance at hand, and when the Predator is nearby they complement the exploding bombs with all manner of assault weapons, including one wielded by team member Blain (Jesse Ventura; yeah, another future governor). This thing fires about a million rounds a second with bullets the size of SCUD missiles. Shit blows up like crazy, and the surrounding jungle is reduced to mulch, but the Predator survives. 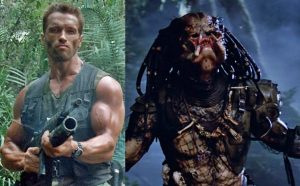 Dutch and Anna are all that remain. Determined to avenge his team, Dutch tells Anna to head for the extraction point so that he can go mano a mano (mano a alien?) with the Predator. (They finally come face to face, the Predator removing its helmet and prompting Arnie to utter his classic line: “You’re one ugly motherfucker!”) You wouldn’t think a whole lot of shit could blow up in a confrontation like this…but be assured that half of the jungle will be gone by the time Dutch thumbs his ride outta there.

Arnie didn’t return for the sequel, which was left in the capable hands of Danny Glover. We go from the Central American jungle to the mean streets of Los Angeles, which I guess is a jungle unto itself. This time, shit starts blowing up about a minute or two into the film, with LAPD inserting itself into a turf war between Colombian and Jamaican drug cartels. And, of course, another cloaked Predator is observing the carnage from a rooftop. 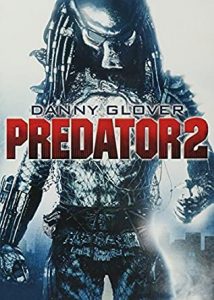 Police lieutenant Mike Harrigan (Glover) arrives like an avenging cavalry, and more shit blows up as he drives the Colombians into a building, where they replenish their arsenal. The Predator attacks them, and even more shit blows up as they try to defend themselves. No success, of course, as Harrigan and his team find them all slaughtered.

As Harrigan deals with being reprimanded by his superiors for interfering in an operation conducted by federal agents (they know about the Predator and want to capture it to utilize its technology), the Jamaicans attack and torture the Colombian leader in his high-rise apartment. Enter the Predator once again, and more shit blows up as they do battle with the nasty alien. When Harrigan finally shows up they find all of them hanging upside down, skinned and missing various body parts.

It becomes even more personal for Harrigan when team member and best friend Danny Archuleta is killed by the Predator. He discovers what the Feds are up to when he tracks their headquarters to a slaughterhouse, where they’ve set a trap for the alien. The next round of shit blowing up occurs amid the hanging sides of beef, with most of the Feds becoming dead meat. All that’s left is Mike Harrigan, and it looks like another mano a alien confrontation is on the agenda. 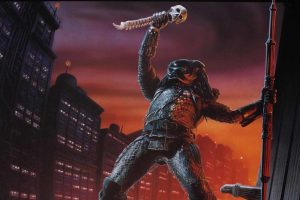 The Predator likes his trophies.

Okay, this sequel was not nearly as well received as its predecessor, but it did make money, which is all that matters in Hollywood. Still, the next entry in the Predator Universe did not appear until 2010, and a second one in 2018—although there were a couple of spinoffs. From what I’ve heard, another film is in pre-production, so it looks like shit will be blowing up for some time to come.