Bernie Smith Is Back! Well, Soon…

It is about time to announce (trumpets, here) that I am hard at work on a new book! The Horrors of Harrmel, a Sword & Planet spoof, is a sequel to my 2016 novel, The Wizard from Harrmel, sub-titled The Weird Adventures of Bernie Smith on the Distant and Deadly World of Persus. If the tides don’t rise and the meteor misses Earth, it should be ready in a month or two. 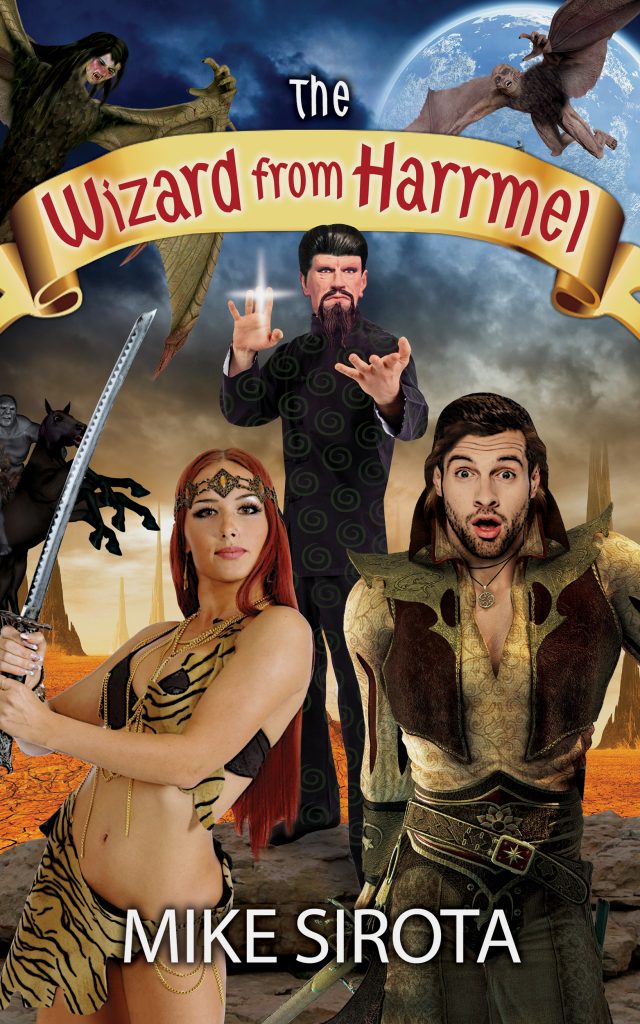 In the first book, Bernie is zapped up to Persus by a strange beam of light from a cornfield in Iowa. His many bizarre and outrageous adventures include facing off against the evil wizard, Heevit Upp, as he attempts to rescue his incomparable bride, Thanna Dora, from his clutches.

In The Horrors of Harrmel Bernie and Thanna Dora trek across the dreaded dark land of Harrmel in search of her father, Skreen Dor, who left their village when she was a child and never returned. The adventures get even more outrageous.

Here is an excerpt from the first book. Bernie comes across a guy who is about to be eaten by a deadly predator. Naturally, he just has to help.

The thing that padded silently across the rich earth hardly belonged here amid all the nice things that surrounded it. An oily, elongated torso about eight feet in length sat atop four narrow, hairless appendages, each of which ended in a sharply taloned paw. The tail—if you really had to call it that—looked like a tapered extension of the slick, violet-hued trunk. Its awful, oversized head sat on a neck only slightly less thick than the rest of its body. Lengthy dun-colored strands of hair grew from the top and sides of its huge head, this manelike growth a pretty good clue that the creature was feline. Two wicked, bloodshot eyes sat inches above a fleshy snout, which had no less than three obscenely flaring nostrils. The salivating mouth, oddly, did not have a lot of teeth, though the ones inside it looked rather nasty. I had first thought that the monster was spotted, but now I saw that the randomly spaced dots, which extended from below the neck to the end of the tail, were large ticks or something. They were all bloated to enormous size, probably having chowed down on the blood of their host.

Taking this lovely picture in, I quickly lost interest in my pending dinner.

It didn’t take me long to see what the beast found so interesting in the clearing. Over on the far end I spotted a man, his ankle ensnared in the branches of a dead tree. He was trying to free himself, I’m pretty sure, but not with anything you would call urgency, which seemed weird, considering what was about to eat his face. Undoubtedly paralyzed by fear, I concluded, since the stalking thing was less than ten yards away. He was unarmed, something I think the feline knew, because it approached him slowly, as though trying to prolong the guy’s torture. That obscene wailing, spitting noise it made sounded—I swear—kind of smug.

All right, maybe I was being goofy, devil-may-care or impulsive—which is to say a major idiot—but I just couldn’t stand by and watch some mindless creature pick the bones of a fellow human. Besides football, I’d done some track in school and was fairly good with the javelin. Even though the Luuzur spear looked crude, it felt well balanced, something I had discovered while hurling it in front of me a number of times as I’d done my John Muir stroll across the landscape. 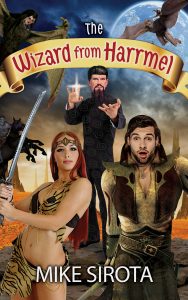 So here’s what I did: I jumped out of the foliage and ran toward the gross-looking creature, staying out of its range of vision for as long as I could. Choosing a spot on its side, I hurled the spear with all the strength I could muster. As close as I was, I figured it would penetrate enough to take the thing out.

Guess what, it bounced off.

The shaft splintered, like it had been thrown against a steel wall. Wait a minute, it had left a scratch there, about on par with a shaving nick. Enough to get the thing’s attention. Its bloodshot eyes looked at the wound, then at me.

Yeah, I had pissed it off. Its weird wail became a gruff roar, which I think meant You are really going to regret the course of action you have chosen.

It padded toward me.

Well, one thing had worked: I’d diverted the monster from its intended prey. Wasn’t that nice of me? Here I was, standing like a Cro-Magnon man with a stone knife and ax, wishing for an Uzi that wasn’t going to appear, facing a huge (probably famished) creature with a terrible attitude and skin like the outside of a tank.

And had I really helped this guy out? After I’d provided the thing with a good meal, it would undoubtedly pick up where it left off. It could drag the guy back to feed its cubs, or its elderly parents, or perhaps save him for a late night snack. No sense letting a fresh kill go to waste.

I should have planned this out more carefully.

All right, back to the confrontation. My weapons poised menacingly in a way that I’m sure was scaring the crap out of the monster, I started circling the clearing. Having regained control of itself, probably through years of counseling, the thing’s gruff roar again became that awful wailing as it stalked me slowly.

About then I decided that maybe the trapped fellow could help me, so I worked my way over to him. I knew he was only a yard or so behind me, but I didn’t dare glance back, so I addressed him in a real low voice:

But there came no answer, and again I started having this bad feeling that the “common” language I’d learned was only common among the people of the Unclad Desert. Or maybe, since what I said required one finger up the nostril and another in the navel, he might not have understood the whole thing. I repeated the question as best I could, while the monster padded closer.

“Huh? Whuh?” the guy said in a rather dorky, droning voice. Oh, great!

I don’t know, maybe the guy was more injured than I’d thought. Whatever; in another few seconds I would be out of earshot. I tried again.

“Oh, uh-huh,” he said. “It’s the throat. The skodorg can be killed by piercing its throat.”

He might as well have told me that the only way to do in the beast was to slip a little arsenic into its chamomile tea while we were enjoying crumpets and good conversation at a roadside cafe. How in hell was I supposed to get to its throat? I don’t think asking it politely was going to work.

Well, of course Bernie will prevail, or he’d never make it to the second book. I’ll keep you posted on The Horrors of Harrmel. In the meantime, The Wizard from Harrmel is available from Amazon in eBook and paperback. Enjoy!