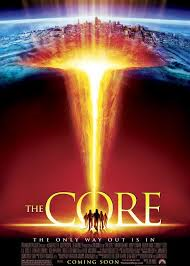 I strongly believe in science, especially when it comes to dealing with major issues such as global pandemics and climate change. But when I watch a movie, primarily in two of my favorite genres—disaster films and sci-fi—I’m doing it to escape from reality for a couple of hours, and I’m not particularly concerned with whether the scientific aspects of the story are entirely accurate. So I am rather pissed off when some of my favorite movies are panned by film critics and scientists alike for their “bad science.” Come on, folks, it is just a story! Our 3% brains should function enough to know the difference between truth and fiction.

WORST OF THE WORST?

The 2003 “science fiction/disaster film,” The Core, tops many lists of “bad science” films. Heck, in a poll taken of hundreds of scientists about bad sci-fi films, The Core was voted the worst. But did I care? Nope. I still watch it every couple of years, and I’m never bothered by the “bad science.” (See my post, “Guilty Pleasures: The Core.”) It has a solid cast (Hilary Swank, Aaron Eckhart, Stanley Tucci, Bruce Greenwood), and almost non-stop action. So what’s the problem?

On their way to the center of the Earth, Josh and Bec have to make some tough choices.

Well, beginning with the improbable crash landing of the space shuttle in the Los Angeles River basin (I guess that’s “bad technology”), just about everything, according to the Goliath website article, “13 Sci-Fi Movies That Completely Ignore Science.” In the story the Earth’s core has stopped spinning, and the plan is to drill to the center of the planet and kick-start it by way of nuclear blasts, before our world becomes toast. They build a ship made of “unobtanium” (I’m not making that up!) to get there.

So, the bad science: there is no way the ship could maintain radio communication with the surface, and the pressure that far down would crush such a vessel like an eggshell. And that’s only the beginning. But I ask you: did you know those two things? I didn’t. And even if I had an inkling of those factoids, I would have written it off to the ship being constructed of that magical element, unobtanium. I just enjoyed the story.

A notch behind The Core for “bad science” is the 2004 “climate science fiction disaster film,” The Day After Tomorrow, starring Dennis Quaid, Jake Gyllenhaal, and Ian Holm, among others. The fact that it grossed over half a billion dollars (The Core was a box-office bomb) meant that a lot of folks were exposed to “bad science,” but somehow the Earth survived.

The Goliath article succinctly describes The Day After Tomorrow in this sentence: “Global warming basically bitch-slaps New York into a new ice age overnight.” It also stated that the film portrayed right-wing politicians dismissing climate change as a liberal hoax. At least they got that correct, ya think? 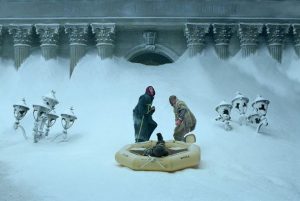 The New York Public Library is closed for a snow day.

Sure, just about everything relevant to climate change is over the top in this film. One paleo-climatologist wrote that The Day After Tomorrow “…is to climate science as Frankenstein is to heart transplant surgery.” Ouch! Another reviewer called it “…a great movie and lousy science.” Yahoo Movies included it as one of its top-ten scientifically inaccurate films.

And so on, but you get the point. I could say more about this film, which is one of my absolute favorites. But it occurred to me that I have yet to write about it, so that will be rectified next week.

To reiterate what I said at the start of this post: with some movies you need to ignore the so-called “bad science” and just enjoy the story. That’s what I intend to keep on doing.