My bride and I have gotten hooked on Murdoch Mysteries, a popular, award-winning Canadian television series on Acorn that, to all intent and purpose, might as well be called CSI: Nineteenth Century. We’re into the fifth season as of this writing, and given that the program is in its thirteenth season (and counting), with over 200 episodes, we have a long way to go.

A DETECTIVE AHEAD OF HIS TIME

The series takes place in Toronto starting in 1895 and eventually working its way into the early part of the twentieth century. Detective William Murdoch (Yannick Bisson) works out of station house #4 of the Toronto Constabulary. His crime-solving methods, though commonplace these days, were all but non-existent at the time. These include “finger marks” (fingerprints), blood spatter, surveillance cameras, trace evidence, even a lie detector. In a “steampunk” sort of way, Murdoch’s crude but useful inventions include sonar, night vision goggles, telefaxes, and anything else that he can come up with to improve on the technology of the time.

William Murdoch is a complex man. Raised by Jesuits in an orphanage, he is a devout Catholic in a predominantly Protestant city. (An issue that is addressed in some episodes.) He is a brilliant person in so many areas, but somewhat socially challenged. Though never married, he had been engaged to a woman who died before the start of the series.

Murdoch does love to collect evidence.

The core supporting cast of Murdoch Mysteries—still together after thirteen seasons—begins with Dr. Julia Ogden (Hélène Joy), the chief medical examiner for the Toronto Constabulary. A skilled pathologist—and obviously a woman way ahead of her time—she is strongly supportive of Murdoch’s methods and is always eager to contribute to his current investigation. She is also his on again, off again love interest. They appear perfect for each other, but his social inadequacies usually get in the way. As of the fifth season their relationship is “off again,” but we’re pretty sure it won’t stay that way.

Murdoch’s boss, and the honcho of station house #4, is Inspector Thomas Brackenreid (Thomas Craig). A transplanted, hard-drinking Brit from Yorkshire, he is rather rough around the edges and can come off as a bit crude and belligerent. He is the bad cop to Murdoch’s good cop in the interrogation room. He has questioned many of Murdoch’s “weird” methods of solving crimes, but over time he has come to believe in them and is strongly supportive of his lead detective, even though they continue to clash on occasion.

While Inspector Brackenreid provides occasional comic relief, the bulk of humor in the show is the work of Constable George Crabtree (Jonny Harris). He is eager to learn the ins and outs of detective work, and he serves Murdoch faithfully. He is also an aspiring mystery writer, and by the fifth season he has published his first novel. Crabtree often sends Brackenreid running for his bottle of Scotch.

GUEST STARS: A WHO’S WHO OF HISTORY

One of the show’s unique aspects is having famous figures from the late nineteenth and early twentieth centuries make “guest” appearances. Many of them even assist Murdoch in his current investigation. These include Nikola Tesla, Buffalo Bill Cody, H.G. Wells, Arthur Conan Doyle, Harry Houdini, H.P. Lovecraft, the Wright brothers, anarchist Emma Goldman, Thomas Edison, and so many more. Even Queen Victoria will visit one of her “colonies,” as will politicians Teddy Roosevelt and Winston Churchill.

The one I’m really anticipating is a guest appearance by Mark Twain. Not only because I’m a big Twain fan, but also because of the well-known Canadian actor who portrays him: William Shatner, for crying out loud! 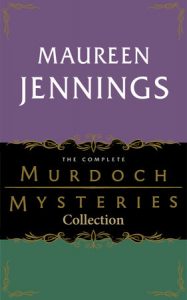 The characters in Murdoch Mysteries are all based on a series of eight novels by Maureen Jennings. Prior to the start of the series in 2008, three full-length TV movies were aired in 2004-2005. The four main characters were played by different actors. We viewed these movies first, and they are what hooked us on the series.

But 200 episodes cannot be based on eight stories, so the challenge for writers was to make each episode unique. So far we’ve watched over sixty of them, and we have yet to be disappointed.

An example: in a season four episode called “Dead End Street,” Murdoch and Julia are at a street fair, where they admire an exquisitely detailed miniature model of a Toronto neighborhood and its residents. Murdoch notices a figure in the second-story window of one of the houses. The figure is aiming a rifle down toward the street. Curious, he locates the actual street and finds the artist, a mentally challenged woman who does not speak. Her caretaker brother says that she creates exactly what she sees. So was someone murdered that day, months past? Quite a challenge for Murdoch, and a brilliant episode. 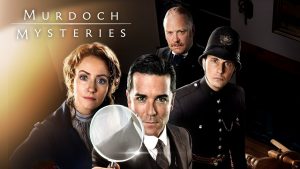 Jacqueline and I do love our murders, and Murdoch Mysteries should keep us busy until baseball season begins. 😊 We highly recommend this show.