I usually don’t write about musical theater, but I saw a show last week at San Diego’s Old Globe Theatre that remains indelibly stamped in my mind and my soul. Allegiance: A New American Musical, premiered at The Old Globe on its almost certain path to Broadway in 2013. The show tells the little-known story of the internment of Japanese Americans during World War II in what amounted to concentration camps in our own country. This happened shortly after Japan’s attack on Pearl Harbor, when President Roosevelt ordered the forced evacuation of over 100,000 people, all of Japanese descent, two-thirds of them American citizens, the majority living in California.

The “logic” behind this was that Japanese Americans could serve as spies for the Empire of Japan. Ultimately, not a single American citizen of Japanese descent was ever charged with, much less found guilty, of espionage or sabotage. The government subsequently apologized for the internments and paid reparations to the survivors.

Allegiance is the culmination of a life-long goal for actor George Takei, best known for his role as Mr. Sulu in the original Star Trek series and subsequent movies. Born in Los Angeles, Takei was uprooted along with his family after Pearl Harbor and lived out a good deal of his childhood in an internment camp in Arkansas, and at the notorious northern California camp at Tule Lake. The family returned to L.A. when the war ended.

I knew little to nothing about the internment of Japanese Americans until about a decade ago, when I worked with an elderly gentleman named Jack on his memoir about growing up in Venice, California during the Depression and WWII. In high school, Jack had many friends of Japanese descent, all born in America. They were just like any other kids, playing sports, sitting on the debate team, and serving in the student government. Shortly after Pearl Harbor Jack recalled going over to a close friend’s house, where he had always been welcome by the family—and finding them all gone. As he watched, a truck pulled up to the door and a bunch of men stripped the house of all its belongings, often arguing over who got what. Before too long, Jack found out what had happened to his friend, and to all of his Japanese American neighbors.

In Allegiance, George Takei plays two roles. At the beginning he is Sam Kimura, an elderly, embittered World War II veteran who, in remembrance of 9/11, has donned his old uniform. He has been estranged from his once beloved sister, Kei (played by Lea Salonga), for over fifty years. He learns of her death, but his heart is still hardened, even though the middle-aged woman who brought the news also gave him an album of photos from his past. 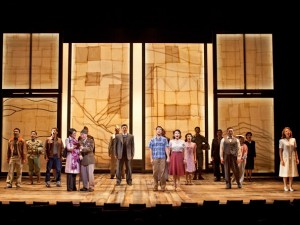 The cast of Allegiance

The young Kei appears to take Sam—and us—back to a better time, when young Sammy (now played by the talented and energetic Telly Leung), his sister, father and grandfather (also played by Takei) live and work on a farm in Salinas, California. Sammy has just been elected class president, and the future looks bright. Then, Pearl Harbor is bombed, and the Kimura family is interned at the grim Heart Mountain camp in Wyoming.

While most endure the harsh conditions of the camp, Sammy joins the Japanese American Citizens’ League and ultimately enlists in the all-Japanese American 442nd Regimental Combat Team. Others at Heart Mountain refuse enlistment. Why fight for a  country that has imprisoned their families? This created friction between Sammy and others in the camp before he left. 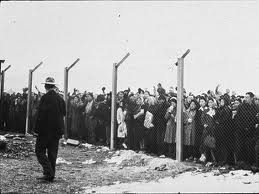 After the war Sammy, having been wounded, returns a hero and seeks out his family, now living in San Francisco. He learns that his grandfather died at Heart Mountain. Kei, his sister, has married one of the resisters, and Sammy, enraged, turns his back on them, and their newborn daughter.

Over fifty years later the old Sam, after viewing the photos and reviewing his life, goes to the memorial service and pours his heart out to Kei at graveside. The woman who brought him the album—Kei’s daughter—is pleased that he has come. By her death, Kei has given Sam another chance at redemption. As Sam hugs his niece, there is barely a dry eye in the house, mine included.

And this is a MUSICAL? Hard to believe, but the songs are perfect. Check out these samples on the Allegiance website. I also have to admit that one of the reasons I wanted to see the show in the first place had to do with Lea Salonga. She was the star of the original Miss Saigon, and she also starred in Les Miserables, among many other shows. Until now I had never seen her perform live, but I’ve heard enough of her singing, and watched her on YouTube, to know that the emotion she puts into her acting and singing transcends anything I have ever seen on stage—and I have seen a lot. To see what I mean, check out Salonga performing I Dreamed a Dream. She is, in a word, spectacular.

Unless you live in Southern California, and unless you hurry to The Old Globe in the next week, you won’t be seeing Allegiance for a while. But it won’t be going away for long. It deserves a place on Broadway, and I hope this important and powerful story stays on the Great White Way and on tour for a long time to come. We can all learn something from it.