A QUIET PLACE: Part II—Not As Quiet, But Still Awesome 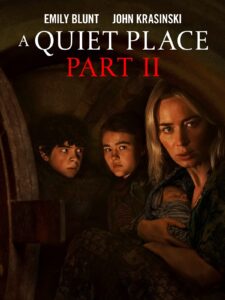 The story contained within the remarkable 2018 horror film, A Quiet Place, began on “Day 89” and went forward from there. So when A Quiet Place: Part II (2020) opens on “Day 1” we are assured of finding out how it all started. But it is not entirely a prequel to the original film. The first ten or so action-packed minutes more than adequately detail how the blind alien creatures with acute hearing appear on Earth with one apparent mission: destroy every living human. The remainder of the film picks up from the exact moment the previous one ended—in the basement of the Abbotts’ farmhouse.

If I’m sounding a bit vague here, I’ll hearken back to what I said when I wrote about the first film. (See my post, “Shh—Don’t Make A Sound…”) I can hardly write an abstract, much less a synopsis of the plot, without giving away the heart of the story. The same holds true for the sequel. So let’s call what follows an abstract of an abstract and leave it at that. 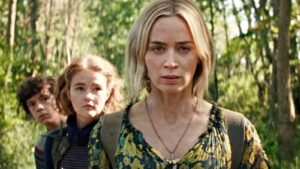 The Abbott family, having discovered a possible chink in the (literal) armor of the seemingly indestructible aliens, travel to a nearby farmhouse, a kind of fortress constructed by neighbor and former friend Emmett (Cillian Murphy). There, they hear a radio broadcast of a single song, “Beyond the Sea,” by Bobby Darin. It has played every day for months. The brilliant Abbott teenager, Regan (deaf actress Millicent Simmonds), wants to find the source of the broadcast to enhance her discovery of a way to stop the aliens, and she’s pretty sure she knows where it is. With Emmett following—Regan’s mom, Evelyn (Emily Blunt), had begged him to protect her—Regan sets out across this deadly land to find the source. 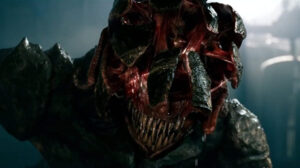 The blind aliens are nasty!

Okay, I know that’s not much, but you’d want to smack me silly or melt my stash of ice cream if I revealed some of the remarkable plot points. Suffice to say, A Quiet Place: Part II is one of those rare sequels that hold up against the original. It scored 91% on reviews by Rotten Tomatoes (the first film scored 96%). The acting is top-notch, with Simmonds stealing many of the scenes. At times heartbreaking and uplifting, the film delivers a lot…and promises even more to come. At this point a spinoff is scheduled for 2023, and another sequel for 2025. But it’s Hollywood, so we’ll see.