I believe it is significant that I’m writing this post on April 15th, which happens to be Jackie Robinson Day. The great baseball player—and even greater human being—broke the color barrier in what up until then had been a racially segregated sport, when he took the field for the Brooklyn Dodgers in 1947. His involvement in the Civil Rights Movement continued well past his baseball career, right up until his death in 1972. 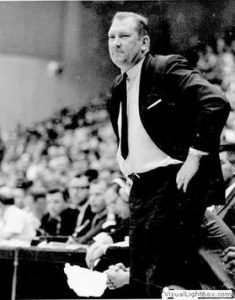 During the 1960s few black players appeared on the rosters of college basketball teams. One exception was a school in El Paso, at the time called Texas Western College. (It would later be known as UTEP—the University of Texas, El Paso.) The team—nicknamed the Miners—recruited black players as early as the 1950s. But its greatest success came with the arrival of a new coach for the 1961-1962 season. His name was Don Haskins.

At a time when many schools’ basketball teams had all-white rosters—especially in the South—Haskins had no problem inheriting three black players from the previous coach. He continued recruiting African-Americans from as far away as New York City, and during his first four seasons the Miners boasted an impressive record of 78-25. But the team’s exploits paled by comparison to what occurred during the 1965-1966 season.

With black players comprising at least half of its roster, the Miners went undefeated—until the last regular season game. Still, at 23-1 they entered the NCAA Tournament ranked #2 in the nation. They won their next four tournament games—one in overtime, another in double overtime—and prepared to meet Kentucky, the #1 team in the nation, for the championship, on March 19, 1966. 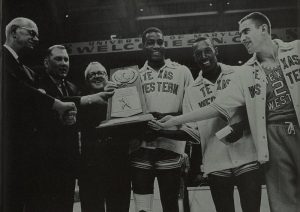 The perennial champion Wildcats, led by legendary head coach Adolph Rupp, had an all-white roster. Imagine what must have gone through their heads as Don Haskins started an all-black team for the first time ever. Later on Haskins would say, “I really didn’t think about starting five black guys. I just wanted to put my five best guys on the court.”

Sadly, subtle racism did rear its head after the unexpected win. No one brought out a ladder for the Miners to cut down the net. One player had to stand on the shoulders of another. Nor was the team invited to appear on The Ed Sullivan Show, as winning teams before them had done.

Still, the win went a long way in promoting desegregation for teams in the Southeastern Conference. Its first black basketball player would appear in 1967. 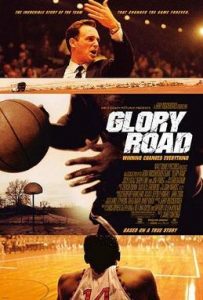 As for Haskins, he went on to coach Texas Western/UTEP till 1999. In his bestselling book, Glory Road, published in 2005, he wrote, “I certainly did not expect to be some racial pioneer or to change the world.” But he did much to end segregation of college basketball teams in the South. Jackie Robinson would have been proud.

In 2006 Walt Disney Pictures released the film, Glory Road, based in part on Haskins’ book. Josh Lucas portrayed the legendary coach, the story focusing on his recruitment of the players that won the national championship in 1966 and, of course, the memorable season itself. The blatant racism encountered by the players at diners and such is not a comfortable thing to watch, but it is important in understanding how things were back then. The film deservedly won the 2006 ESPY Award for “Best Sports Movie.” It is one of my favorites.