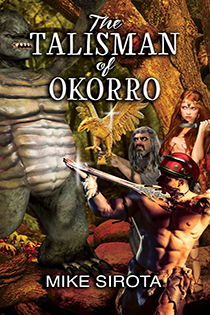 A KINGDOM IN RUINS – Prince Jarrod of Veskia had no choice. With his father, King Vurgus, near death, his depleted and demoralized army surrounded by vast barbarian hordes on a desolate battlefield, Jarrod could only agree to the proposal made by the wizened stranger called Thagor Shen. This sorcerer from a dark and distant land would utilize the powers of a damaged talisman—a solid gold statue of a hawk—to destroy Veskia’s enemies and see the triumphant army return to Shordona, capital of the kingdom. In return, Jarrod would seek out the broken piece of the talisman and return it to Thagor Shen. What did the prince have to lose? Not even his father’s last words—the only words the comatose Vurgus had spoken in many days—could deter him: “YOU…MUST…NOT…”

Preview a sample chapter of The Talisman of Okorro