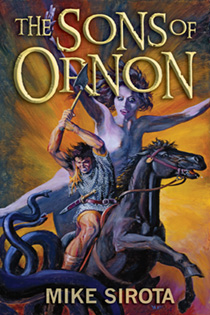 Ornon, the ruler of the powerful kingdom of Shadzea, fathered twenty sons. In order to find the one son worthy of inheriting the throne, nineteen of them had to die.

Though the life of the Twenty is rigid, Dulok manages to meet secretly with his mother every week. Ornon’s twentieth son has no desire to be the Survivor, the future ruler of Shadzea. As soon as they find a way, Dulok and his mother, a humble kitchen servant named Daynea, will flee the City of Kings for a simpler life.

But on a fateful night, as they make their plans, the door to Daynea’s quarters bursts open. There stands Ornon with Buz, his first son—Dulok’s hated half-brother, who has discovered Dulok’s “indiscretion.” With two soldiers restraining him, with Buz laughing cruelly, Dulok watches in horror as Ornon drives a sword into Daynea’s heart.

That night, Dulok’s destiny becomes clear. He will survive the dangerous Princes’ Trials at all cost, so that he might stand on the Day of the Reckoning. Then, and only then, he will destroy Ornon and Buz, and the life of the gentle Daynea will be avenged.

Preview a sample chapter of The Sons of Ornon

“If you enjoy sword and sorcery novels with mystifying, beautiful women and enigmas and twists thrown in to the mix, then you’ll love this one. Watch out, Mike Sirota’s novels are fast and furious and can become as addictive as your morning coffee. Highly recommended.”

“The story has it all: questing, sidekicks (faithful and otherwise), stallions (of course!), magical gems, beautiful women, conniving women, devious men, honor, betrayal and skullduggery. No Hero’s Journey would be complete without these elements, and Sirota handles them well. To me, even more importantly, he managed to slide two ‘reveals’ past me—two mysteries and surprises that I never saw coming. I absolutely relished these; and when I checked, yes, he’d given me a clue here and there, cleverly enough so that I missed them—so it wasn’t a ‘cheat’ or a Deus Ex Machina. A quick, engaging read that fulfills all you could ask from this theme; I recommend it confidently to anyone who loves this genre.”