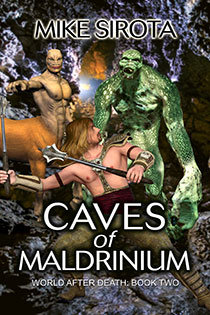 Dannus Erekwane of Maldrinium, once known as Eric Wayne of Earth prior to his death, thought he’d encountered enough adventure for a second lifetime on the deadly Tuelian Continent. But before he could barely settle in with his beloved Marana on the benevolent Jennithusian Continent, an accident in a mine plunges him many miles beneath its surface into a vast cave world. The countless dangers to his own life are nothing compared to what Dannus soon discovers: the evil Vatrogs, rulers of this underworld, have developed the means to destroy all life on the surface, and they intend to carry out their plan. What can one man do to prevent this unspeakable act?

Preview a sample chapter of Caves of Maldrinium