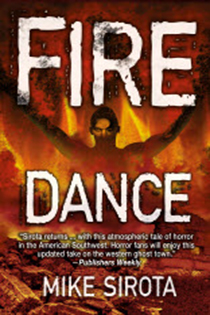 The searing wind whistles through the ruins of Concordia Sanitarium in Southern California’s bleak Anza-Borrego Desert. Now, something else stirs: the tormented spirits of the staff and inmates who perished in an all-consuming fire over a century earlier. As one gruesome murder after another plagues the nearby quiet retirement community of Smoke Tree, Tracy Russell and Mark Alderson try desperately to stop the one inmate that should never have been released—either in life or in death.

“Sirota has created a blended genre ghost story-walk-in tale that has shiver-producing moments side by side with moments of extreme empathy. Is there pure evil in the world? Is that evil strong enough to reanimate? What happens when innocent souls are trapped in place and cannot rest eternally? Sirota is a masterful story teller, and Fire Dance confirms his spot in the horror/gothic realm of Dean Koontz and Edgar Allan Poe.”

“Fire Dance is one of the most frightening and suspenseful novels I’ve ever read. The ‘bad guy’ in this novel is an iconic monster—a force of impersonal, violent evil. When sympathetically written characters are threatened by this monster, the tension ramps up to a point where I had to put the book down periodically and catch my breath. It’s a thrill ride!”