Stone Woman: Winema and the Modocs 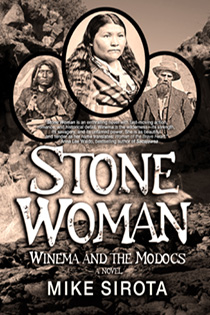 A War Story; A Love Story; A TRUE Story

Although a novel, STONE WOMAN is a true story of California’s indigenous Modoc tribe and their remarkable last stand in 1872-73 against the U.S. Army. The story is told through the eyes of two people: Winema, the Modoc Woman of the Brave Heart, and Frank Riddle, a Kentuckian who came to this rugged land in search of gold, and found so much more. First working to help maintain the uneasy peace during the two decades preceding the war, then serving as interpreters during the six-month war—at great risk of their lives—Winema and Frank are the embodiment of courage and sacrifice. The Modoc Indian War, played out in the bleakest of theaters—the lava beds of northern California—is a microcosm of the countless other wars waged against this land’s native People, and one you won’t soon forget.

Preview a sample chapter of Stone Woman: Winema and the Modocs