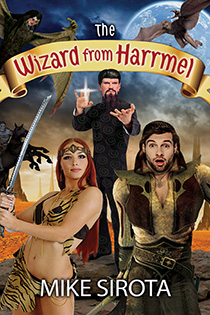 Preview a sample chapter of The Wizard from Harrmel

“Like adventure? Like exotic worlds? Like humor? Like a great read that cries for a sequel? The Wizard From Harrmel is all of these and much more. It’s worth reading the book just to appreciate the names of the characters. Great plot with just the right touches of romance and swashbucklingness. If you liked The Hitchhiker’s Guide to the Galaxy, you’ll love this one too.”