While I’m traveling in Colorado this week, here is a 2013 post about a trip to the neighboring Grand Canyon State.

So what DON’T I like about Arizona? Traffic roundabouts. Can’t stand the damn things, which are ubiquitous—at least where Jacqueline and I traveled during our recent trip. In a small town called Cottonwood there were like four or five of them in a row—in the middle of freaking nowhere! Even after I sort of got used to them in the more heavily traveled Sedona, I had to dodge a lot of clueless drivers trying to negotiate the blasted things. 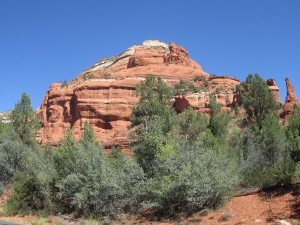 One of Sedona’s many vortexes.

Okay, there’s my mini-rant. Other than that, I love the state, especially everything we did there. We started in Jerome, a funky town high up on the side of a mountain. Once renowned—and infamous—for copper mining and prostitution, it is now home to a small community of artisans, whose creations are sold in small shops and galleries.

We set up home base in the small village of Oak Creek, a few miles south of Sedona, at a bed & breakfast called the Adobe Hacienda. The owners, Aurora and Russ Mulder, were not only neat people, they also served a gourmet-breakfast-to-die-for every morning. (“At 8:30, not a minute before or later.”) If you have an early morning hike or something, they’re happy to pack you a doggie bag.

My bride did a number of spiritual things with Sandra Cosentino of Crossing Worlds Journeys and Retreats. They’re personal, so no details here, other than to say that she loved the experience. Sandra did take us on a tour of Sedona’s vortexes—the city’s famous spiritual energy sites. They are awesome, especially Bell Rock, located just up the road from our B&B. 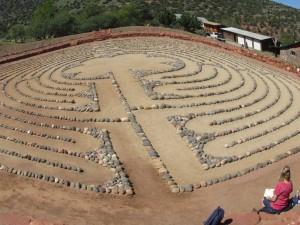 The labyrinth: a peaceful experience.

Sandra also recommended a visit to Angel Valley, a spiritual retreat away from the bustle of touristy Sedona. Hard to reach; the road beat the crap out of the rental car. But well worth it, a tranquil place where we each negotiated the larger of two labyrinths in a walking meditation. Pretty cool experience.

Even more ubiquitous than the roundabouts are Sedona’s Pink Jeeps, which take small groups on many different tours. We finally gave in—and we’re glad we did. The three-hour Ancient Ruins tour took us out to the Honanki Indian Ruins, where the Sinagua people—ancestors of the Hopi—lived from about 1100 to 1300 AD. Two of the three hours are spent driving (bouncing) to and from the ruins on rutted dirt and stone trails—not great for anyone with hemorrhoids. We loved it. 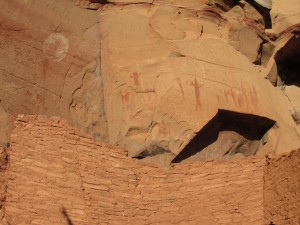 Petroglyphs at the Honanki Ruins.

Our driver, an experienced guy named Tim (“Call me Tall Tim…”) proved a fount of information about the history and mythology of the place. He also turned out to be a heck of a storyteller. One of his tales involved a group that he took out to Honanki some years ago. As he explained what each of the petroglyphs meant, one young boy stood mesmerized by the image of an ancient deity. The group moved on, but the boy passed out. Tim and others revived him, and he first rejoined the group but then returned to the image of the deity—where he passed out again. This time Tall Tim called for a helicopter, but when it arrived, the boy appeared lifeless. While in the air they could find no vital signs—until the boy’s eyes snapped open and he sat up, scaring the crap out of his rescuers. They checked him over thoroughly in the hospital and found absolutely nothing wrong with him. Weird…

Tim’s second story involved a group of college-age girls from Philly—loud, rude, and crude. Indian ruins and petroglyphs were little more than a diversion to them. Suddenly, one of the girls fell to her knees and sobbed uncontrollably as she stared at the ruins. In a voice that her friends had never heard she announced that she had been there before, and she proceeded to relate details of Honanki that Tall Tim knew were true. He said that it blew him away.

Believe what you want. They were great stories. 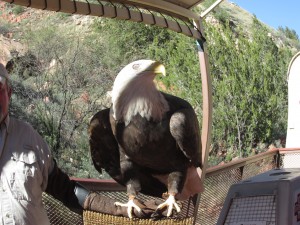 We both love trains, and we especially enjoyed a forty-mile round trip on the Verde Canyon Railroad. In addition to seeing some awesome vistas, all the passengers were treated to a visit by a fully grown bald eagle named Sonora. And on our way back we HAD to stop at Ye Ole Hippie Emporium in Cottonwood. Cheech and Chong would love this place.

Our last full day in Arizona was magic as we did a cultural immersion on the Hopi reservation. Our guide, Clint Frakes of Sedona Sacred Earth, shared a great deal about Hopi history and culture on our long drive up to Hotevilla on the Third Mesa, where we met our Hopi guide, Allen Talayumtewa of the Water Clan. (You can’t tour the reservation without a Hopi guide.) Allen and his wife, Pat, opened their home to us and shared a traditional Hopi lunch. (Fry bread and beans!) Allen apologized for no meat in the beans, explaining that he couldn’t find any road kill that day. The Hopi have a great sense of humor.

Allen and Clint then took us to some sacred sites that are not on any tourist itinerary. At an isolated site—I’m not making this up—we saw more petroglyphs in one place than we’d seen TOTAL in all the years we’ve been visiting Native American ruins. Amazing! Sorry we couldn’t take any photos, but this is strictly prohibited on the Hopi reservation. 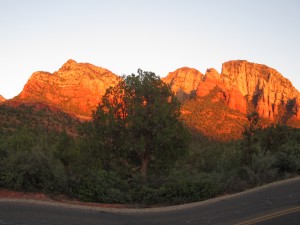 We ended our immersion on the Second Mesa with a visit to the family of Allen’s nephew, world-renowned silversmith Ruben Saufkie. If I ever met a warmer bunch of people…well, I don’t recall it. Jacqueline now owns a couple of Ruben’s beautiful silver charms, and two awesome katsinas (kachinas) carved by another family member have joined our growing collection.

We’ll be talking about our trip to northern Arizona for some time to come, and for sure we’ll be back…traffic roundabouts notwithstanding.