By this time I have rewritten and reissued all of my previously published novels, a monumental task. This post first ran in 2017. 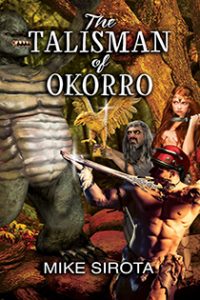 Over the past few years I’ve been busy rewriting and reissuing many of my novels, the ones that were published from the late 1970s through the ’90s. Some revisions proved relatively easy; others needed a good deal of effort. But nothing, nothing came close to the amount of work required in making a silk purse (hopefully) out of what I consider my most notorious sow’s ear.

I first published my Sword & Sorcery novel, The Golden Hawk of Zandraya, with Zebra Books/Kensington Publishing in the early ’80s. It became the sixth and last book that I did with this publisher. We’d always had a good working relationship, and truth be told, I take the majority of responsibility for what went wrong with this story, which I feel was victimized by a perfect storm of events.

To begin with, I probably should not have been writing anything at that time. Life had gotten in the way, as it often does, and to call me an “angry young man” back then would be a gross understatement. So I channeled this anger into over 100,000 words of “life’s a bitch and then everyone dies.” Yes, everyone. There was nothing redeeming about The Golden Hawk of Zandraya, and if I’d forgotten how true that was, I got a jolt of reality earlier this year when I read it for the first time in decades. Ow, painful. 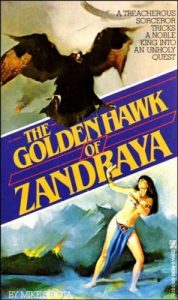 The publisher’s contribution had to do with the tight deadline they’d imposed on the project. I got it in on time, and they rushed the galleys to me for proofing, which took at least a couple of days. I then spent hours on the phone with my editor, per her request, noting each of the hundreds of typos, including three on the front and back cover. Didn’t matter; the book was published with every typo left in. Like I said: a perfect storm.

My initial inclination was to just leave the story alone. But in re-reading it six months ago I noted many of the positives in it, and I also realized that what sucked with it could either be fixed or edited out. Ideas begat other ideas which begat more ideas, and so I began the challenging task of rewriting what I now called The Talisman of Okorro. Over 12,000 words wound up on the “cutting room floor,” and I performed major surgery on the entire story, but especially the second half. It is now, I believe, a fun, entertaining, exciting story in true Sword & Sorcery fashion. I hope you enjoy it.

The Talisman of Okorro is available as a Kindle eBook and in paperback from Amazon.