Throwback Thursday: Myths And Legends—A Gateway To Hell In Kansas

True or not, the legend of this passage to Satan’s digs in mid-America sounds pretty creepy. I first presented this post in 2017. 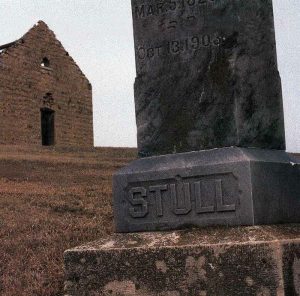 An unincorporated community called Stull, located a short distance from larger Kansas cities Topeka and Lawrence, has the dubious distinction of being the Devil’s playground. That is, of course, if you believe the urban legends about the Stull Cemetery.

Founded in the mid-1850s by settlers of German and Pennsylvania Dutch origin, the tiny town was first called Deer Creek. Although its population never grew above fifty or so people the community, even in its earliest years, boasted a cemetery and a stone house of worship—the Evangelical Emmanuel Church. Just before the turn of the century a post office was established there, with a postmaster named Sylvester Stull. The post office lasted only a few years, but Stull’s name lived on.

Nothing much of a weird nature occurred in Stull during the twentieth century. The only incidents of note were the death of a boy who walked into a field that his father had set on fire, and the strange disappearance of a man. The latter was eventually found—hanging from a tree.

Stull’s fame—or infamy—regarding the supernatural can be traced to 1974, the result of an article in the University Daily Kansan, the newspaper of the University of Kansas. Written by Jain Penner, the article was titled “Legend of Devil Haunts Tiny Town.” Comparing the community to another well-known creepy burg, Penner wrote, “Stull and Sleepy Hollow have another thing in common. Both are haunted by legends of diabolical, supernatural happenings.” 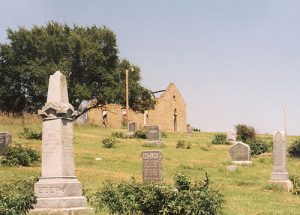 The article went on to claim that, according to urban legend, the Stull Cemetery was a gateway to Hell, and that Satan showed up there a couple of times a year, on Halloween night and on the spring equinox. As the legend grew, the “gateway” became one of the infamous “seven gates to Hell” to many. Decades later the Evangelical Emmanuel Church, which had been demolished due to safety concerns, would become part of the legend, people claiming that it was possessed by the Devil.

In the years following the publication of the article, numerous people—many of them University of Kansas students—began showing up on Halloween and spring equinox to see if the legends were true. Predictably the assholes among the visitors found it necessary to vandalize the cemetery’s headstones and the interior of the ruined church. As Stull Cemetery began to show signs of decay, local gendarmes took it upon themselves to discourage folks from entering the cemetery, especially on Halloween. Trespassers now face a fine, imprisonment, or both.

The gateway to Hell has been extensively researched by historians, academics, and others. Just about all of them, even the locals, believe that the legends of the Stull Cemetery are a crock. After all, they say, what spawned the legends? The overactive imaginations of some creative college students. 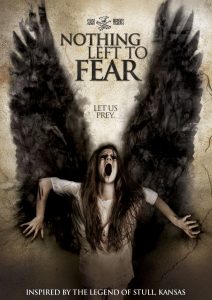 Even so, the Stull Cemetery continues to draw its share of those who are obsessed with the supernatural. The legend has been referenced quite a few times in works of pop culture, most notably a 2013 horror movie titled, Nothing Left to Fear, starring Anne Heche. (I checked it out; you won’t miss a thing if you skip it.)

As for me—well, I’m susceptible to easily having the crap scared out of me, so I’m not planning to spend a dark and stormy night in the Stull Cemetery any time soon.