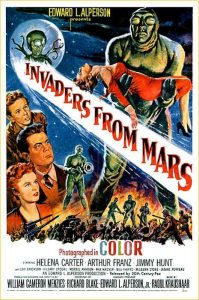 This post, which first ran in 2017, is about Invaders from Mars, one of the first influential science-fiction films of the 1950s.

Growing up in the 1950s I got to experience first-hand the new wave of science fiction movies that defined the era. One of my absolute favorites, Invaders from Mars (1953), had the distinction of being the first film to present aliens and their spacecraft in color (that’s SuperCinecolor, to be specific), beating out the classic War of the Worlds by a few months.

Being a kid myself, the reason I connected with the film most likely had to do with its main protagonist, David MacLean, being about ten years old. Conversely, one part of the story gave me lots of nightmares back then, and it has stuck with me to this day. That has to do with Mr. Mankind…more on him/it shortly. 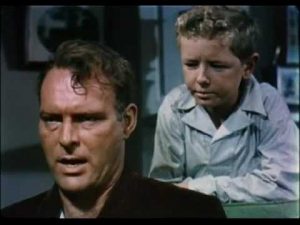 David wonders, what is that bloody scar on Dad’s neck?

FROM OUT OF SPACE CAME HORDES OF GREEN MONSTERS!

With that rather lurid tagline—among a number of others—here is a quick synopsis, with a spoiler alert in place. Late one night young David is awakened by a nasty thunderstorm and races to his parents’ room. Mom and Dad are about the nicest, sweetest people you can imagine, right out of a ’50s sitcom. They put David back to sleep, but he is awakened once again when a flying saucer shows up and disappears in a sandpit not far from his house. Back to his parents’ room, where Dad says that he’ll check it out. He heads to the sandpit but is not seen again for some time.

In the morning, as David and his mother worry about Dad, he finally shows up—as a major asshole. He’s sullen and mean, not like Dad at all. That’s when the boy notices a bloody scar at the base of his father’s neck. Soon he encounters other townsfolk acting the same way. From his second-floor window he sees a little neighbor girl sucked underground in the sandpit. Later, when he meets her face to face, she’s just as nasty as everyone else. Pretty smart for his age, David deduces that aliens in the flying saucer are somehow changing people and sending them out to take part in some dastardly deed—like conquering the planet. OMG!

THEY ACTUALLY BELIEVE THE KID 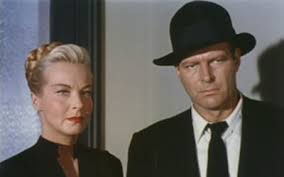 Mom and Dad: not your perfect parents anymore.

When David’s mom joins the Mean & Nasty Club, the kid has had it. He heads to the local police station and tells his story. Unfortunately, the top cop has become one of them, and David is put in a jail cell…for his own protection, the cop says. A sympathetic cop who hasn’t been “turned” calls a Health Department physician, Dr. Pat Blake, hoping that she can help the kid. (It was refreshing—and rare—to see a female doctor in a 1950s movie.)

Though a bit dubious at first, Pat takes David to see her friend, an astronomer named Stuart Kelston. He’s been keeping an eye on the planet Mars, which is in its closest proximity to Earth, and he totally believes David, saying that the saucer in the sandpit is likely a scout ship in advance of a Martian invasion. Kelston convinces the Army that the threat is real, and soon a whole lot of well-armed troops, commanded by Colonel Fielding, are surrounding the sandpit.

As the soldiers prepare for battle, David and Pat are sucked into the sandpit and wind up in one of a few tunnels around the flying saucer. They are captured by two silent mutants, basically tall guys in green leafy suits, and carried into the saucer. There, the unconscious Pat is prepped for something to be drilled into the base of her neck. 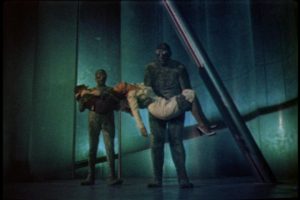 David and Pat are captured by the mutants.

Col. Fielding leads a rescue party into the tunnels, where they encounter more of the mutants, some of them armed with ray guns (really), as well as a soldier who had disappeared earlier and has been “turned.” The mutants are carrying what looks like a spacious goldfish bowl, its contents a large green head with tentacle-like arms and almost no torso. Ee-yew! The soldier says that he is Mankind, the Martian head honcho (no pun intended) who controls the mutants, his slaves, with his mind. (As a kid I always called him Mr. Mankind.)The mutants have implanted mind control devices into all of the people that they kidnapped, ordering them to sabotage a prototype atomic rocket being built at a nearby military base and prevent the device from being used to stop their invasion. If any humans are captured, the implants explode and cause a cerebral hemorrhage. Oh crap! Is that what will happen to David’s parents?

The troops have managed to rescue Pat and David, and after a gun battle the mutants, with Mr. Mankind in tow, flee to their ship and prepare to take off. A powerful explosive device is armed, and everyone heads for the surface. David and the others run like crazy as we see a montage of 1) the key scenes in the story; 2) the flying saucer rising from the sandpit; 3) the countdown clock on the bomb; and 4) the troops firing on the sandpit from all directions. The bomb detonates, the explosion is deafening, and… 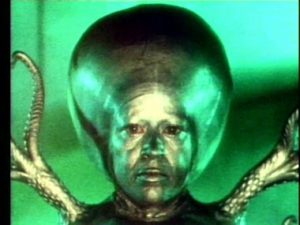 David awakens in his bed to a loud clap of thunder. It was all a dream! He runs to his parents’ room. Yep, they’re as nice and understanding as can be, especially having been roused from sleep for the umpteenth time. David goes back to his room, climbs into bed then returns to the window where—surprise!—he sees the same flying saucer from his dream descending into the sandpit. In the 1950s vernacular he exclaims, “Gee whiz!” End of story.

Okay, I may come off as a bit flippant when writing about Invaders from Mars, but in truth I love this film, which some reviewers described as one of the most influential of the era. It has a high approval rating on Rotten Tomatoes, and it holds up well over six decades later. There was a 1986 remake by the same name, but you can skip that one. I will continue to watch it until the great flying saucer known as the Mother Ship comes for me.

And I will always be creeped out by Mr. Mankind.