Watching this film proves that I’m easily entertained. I first presented this post in 2018. 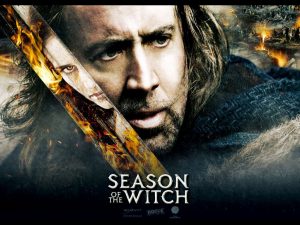 The first time I watched the 2011 historical fantasy/adventure film, Season of the Witch—starring Nicolas Cage and Ron Perlman—I did so with no preconceived notions. The verdict: okay, I’d seen better movies, and for sure a whole lot worse, but I found it watchable. Subsequent research revealed that the film, while doing fairly well at the box office, was reviled by critics and moviegoers alike. Yes, that definitely made it a Guilty Pleasure.

A PLAGUE ON YOU ALL!

No, this wasn’t the film’s tagline—perhaps it’s my opinion of critics? Anyway, with no spoiler alert, here is a brief synopsis. In a 13th century Austrian town, three women have been accused of witchcraft and are about to be hung from a bridge. One denies it, a second admits to it, hoping to be spared. The third simply curses the priest in charge. The women are hung, then drowned (nasty!). The priest returns later that night to read from a sacred book, the Key of Solomon, to make sure they stay dead. Tough luck; the third “corpse” kills the priest and sets the book on fire. 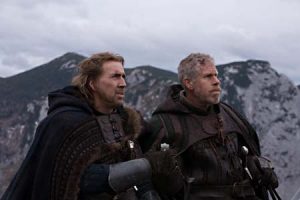 Behmen and Felson are tired of the “Kill the Infidels” tour.

Fast forward to the 14th century, where Teutonic knights are on a Crusade to do away with all the non-believing infidels. In a montage of battles covering a decade, knights Behmen (Cage) and Felson (Perlman) kill about 99,000 people between them. But after destroying a town of mostly women and children, they lose their taste for battle and say, “No mas!” Off they go, branded as deserters.

As they wander the Austrian countryside, Behmen and Felson find their homeland ravaged by a terrible plague. Arriving at a town that has also been hit hard by the Black Death, they are recognized as deserters and imprisoned. They soon learn that the Church believes a young woman named Anna, having been branded a witch, is responsible for causing the plague.

The knights are taken before Cardinal D’Ambroise (Christopher Lee!), who is also infected and looks really gross. He tells Behmen and Felson that the charges against them will be dropped if they accompany Anna to a distant monastery, where the monks are in possession of the last remaining Key of Solomon. They will determine if Anna is indeed a witch, and if so they will use the book to take away her powers and stop the plague. The guys agree, as long as the girl is given a fair trial. (Yeah, right.)

Is Anna a witch, or…something else?

Accompanying the knights and the caged Anna are Debelzaq, a zealous priest; Hagamar, a lowlife who will guide them to the monastery; Kay, a young altar boy/wannabe knight; and Eckhardt, an older knight who lost his wife and daughter to the plague. Anna appears to hate and fear Debelzaq, but she warms to the fair-minded Behmen.

One night along the trail, the kindly Eckhardt is guarding Anna. When Debelzaq relieves him, they chat briefly. Eckhardt mentions how the innocent-appearing girl reminds him of his dead daughter. Anna overhears this, and after the knight leaves she manages to overpower Debelzaq and escape. The men pursue her to a nearby village, where rotted corpses abound. Eckhardt hears what he believes to be his daughter calling to him and frantically tries to find her. In the darkness and confusion he accidentally impales himself on young Kay’s sword. 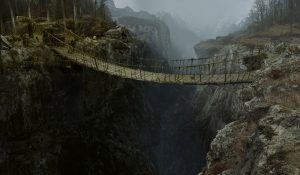 Would you want to cross this bridge?

The men recapture Anna and resume the journey. As they attempt to cross a poorly built rope bridge over a deep gorge, Anna saves Kay by pulling him up effortlessly with one hand. Who—or what—is this girl?

The entourage soon enters the deadly Wormwood Forest. Hagamar, who is not the bravest of souls, attempts to kill Anna so that they can all go home. He is stopped by Behmen and the others. Rather than be grateful, Anna summons a huge pack of nasty wolves. The men fight them off, killing many, but the surviving beasts fall upon Hagamar and enjoy a nice midnight snack. 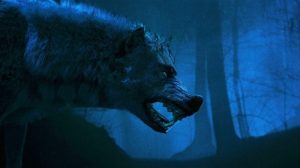 Was Hagamar singled out by Anna for trying to kill her earlier? Behmen seems to think so, and in a fit of anger he tries to get at the girl. He is stopped by the others, who point through the trees at the nearby mountains. There is the monastery, they say, where Anna’s fate will soon be decided, one way or the other.

Telling you what happens from this point on will be giving too much away, so I’ll stop here. The best is yet to come, and if you’ve stuck with this film until now, I don’t think you’ll be disappointed. Season of the Witch is not everyone’s flagon of mead, but as a bona fide Guilty Pleasure I’ll be popping it into the Blu-Ray player every couple years or so till the Mother Ship arrives.