Where there are writers, there are words. I first presented this post in 2016. 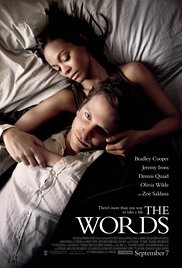 Actually, I could have categorized the 2012 romantic drama, The Words, as a film about a writer writing about a writer—who’s writing about another writer. With a top-notch cast that includes Bradley Cooper, Zoe Saldana, Dennis Quaid, and Jeremy Irons, among others, I figured it was worth checking out.

Author Clayton Hammond (Quaid) is featured at a reading of his new novel, The Words. As he reads, we are transported into the story and we meet Rory Jansen (Cooper), an aspiring writer, and his girlfriend Dora (Saldana). They live in the Big Apple, where Rory, who works in the mail room of a literary agency, tries without success to get his first novel published. 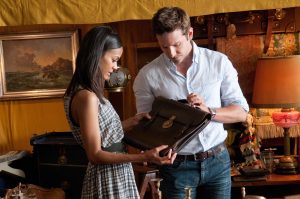 Rory is unprepared for what he’ll find in the briefcase.

After the couple gets married they honeymoon in Paris, where Dora buys Rory an old briefcase that she came across in an antique store. Back in New York Rory is examining the briefcase, which has many compartments, when he discovers a thin, single-spaced manuscript with no author attribution. Reading it, he realizes that the manuscript is brilliantly written and puts his own writing to shame. He does not tell Dora what he found.

Hoping to stimulate his creativity, Rory inputs the manuscript verbatim into his laptop as an exercise. Later, Dora reads the story and is floored. She urges Rory to submit it, which he does. The book is published and becomes a bestseller. With fortune and glory now his, Rory buries any guilt he felt; the author must be long gone, he figures. 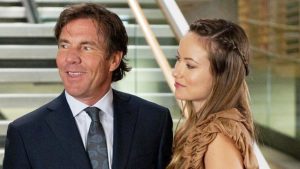 Hammond has no problem being interviewed by Daniella.

At this point in his reading, Clayton Hammond takes a break and is introduced to grad student and aspiring writer Daniella (Olivia Wilde), who wants to interview him. She notices that he still wears a wedding ring, even though he is separated from his wife, and she appears to come on to him. He agrees to meet her after the event.

Hammond resumes reading his story. Rory takes a walk in Central Park and winds up on a bench next to an elderly man. After some polite small talk the Old Man (we never learn his name) tells Rory that he is the author of the manuscript. Try to imagine the look on Rory’s face when listening to this revelation. The story, the Old Man says, is based on his own life, specifically the years that he spent in Paris.

As Rory sits there dumbfounded, the Old Man relates his story—one that Rory knows quite well—and we see it unfold on the screen. As a young man he was stationed in Paris toward the end of World War II, and he fell in love with a woman named Celia. They married and had a daughter, but the infant died shortly after birth. Inconsolable, Celia left him and went to stay with her parents in the country.

The young man, who had never written anything before, poured out his pain, as well as his love for Celia, in the manuscript. He brought it to her and went back to the city. Celia, moved by what he wrote, decided to return to him. She carried the manuscript in a briefcase but accidently left it on the train. The young man could not find it and had no copy. Their marriage went to hell, and after they divorced the young man returned to America. 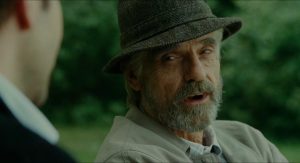 The Old Man stuns Rory with his revelation.

On that note, Hammond finishes his reading. If people want to know what happens, they should buy the book. That makes sense; it’s what we writers expect to happen when we do readings and bookstore appearances, yes?

But Daniella, who has talked her way into going to Hammond’s apartment with him, asks him for more. He finally relents and says that Rory decides to first tell the truth about the manuscript to the two people who trust him the most: his wife and his publisher. He also says that he wants to give the Old Man full credit as the author. To say that he has now created a shitstorm is an understatement.

So what does Rory do? Well, I’m going to pull a Hammond here and say that if you want to know, you’ll have to see the film. There are complex revelations still to come, both in Rory’s and Hammond’s stories, and I don’t want to spoil them. The Words runs a little over ninety minutes and, as you can guess by the cast, is well acted. And you don’t have to be a writer to enjoy it.

The Words did not fare well with critics, though if you’ve read this blog for any length of time, you know how I feel about that. Recently I watched a film that had a 93 percent “Fresh” rating on Rotten Tomatoes, with praise galore from numerous critics. The film, a horror movie, was terrible, an absolute joke that was not supposed to be funny. Subsequent research showed that fans—people like us who fill up the movie theaters—agreed with me.