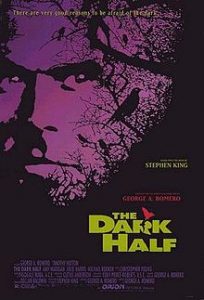 The 1993 horror film, The Dark Half, is an adaptation of Stephen King’s 1989 novel of the same name. His main character, Thad Beaumont, is a bestselling novelist—what else? Writers love to write about other writers, and King leads the league in that category. I should be glad; as long as he keeps writing novels, and as long as they keep adapting them for the screen, I’ll never run out of source material for my “Films About Writers” series.

WHO’S INSIDE MY BRAIN?

Thad Beaumont (Timothy Hutton) was born to be a writer. As a kid we see him scribbling or typing furiously every chance he gets. The only drawback to his childhood: debilitating headaches that nearly blind him. His mother never told him that he had a fraternal twin early in her pregnancy, which was absorbed by Thad’s fetus. When doctors perform surgery, they actually discover remnants of teeth and other body parts in his brain. (Ee-yewww!) 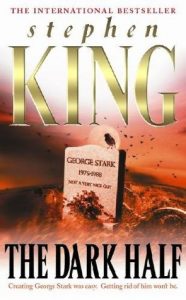 As an adult, Thad writes brilliant literary novels that few people read. He also writes bloody, gory thrillers under the pseudonym of George Stark, and these books—of course—make him a bestselling author. Life is good; he dearly loves his wife, Liz (Amy Madigan), and their twin babies. Only his agents and some folks at his publishing house know who George Stark really is.

When a lowlife tries to blackmail Thad by revealing his secret, he thwarts the guy by coming up with a great PR plan: they’ll have a funeral for Stark in Castle Rock, Maine…grave, headstone, service, the whole enchilada, and that will be the end of the pseudonym. Everything goes well…

…until that night, when George Stark rises up out of the grave.

Apparently, the manifestation of George Stark (also Hutton, in a tour-de-force performance) is determined to live. His ultimate goal is to force Thad to write another book in which Stark gets to exist in the real world. A psychopath, he first kills the old gravedigger at the cemetery, then a local photographer, whose truck he steals. Later, Castle Rock sheriff Alan Pangborn will find Thad’s fingerprints in the truck, and although it doesn’t seem likely, given Thad’s alibi, he will become Pangborn’s prime suspect. 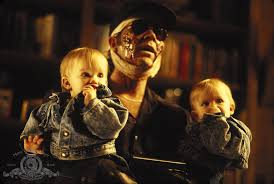 Stark travels to New York City, where he murders Thad’s agents, his editor, and the guy who tried to blackmail Thad. Pangborn knows that Thad was in Maine at the time of the murders, so he could not have committed them. Okay, so just what the hell is going on? And what did the message that Stark left in blood at one crime scene mean? “The sparrows are flying again.”

CONVERSATIONS WITH YOUR ALTER EGO

Now, Thad begins receiving phone calls from Stark, and he worries about additional victims, but most of all about his wife and babies. He travels to a nearby town to confront a doctor who knew about his surgery as a kid. The doctor reveals that Stark was a parasitic twin who existed inside Thad’s brain. Stark shows up and kills the doctor, and since the doctor’s staff only saw Thad come and go, they identify him as the murderer. Can things get any worse for Thad? 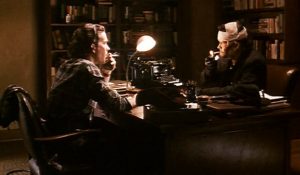 Apparently so; as Pangborn comes after Thad, Stark calls him and says that he has kidnapped Liz and the babies. If Thad doesn’t do what Stark wants, he will kill all of them.

No spoiler alert, just in case you’ve never seen the movie or read the book. The Dark Half, directed by George Romero, is a gripping story, and for me it hits home in another way. I am the proverbial meek and mild as a lamb kind of guy, can’t stand the sight of blood. But in my four horror novels, as well as many of my fantasy/sci-fi stories, I have written some of the ghastliest, goriest scenes imaginable. People who know me are often shocked when they read my books. Uh-oh, I hope there are no fraternal twin’s teeth in MY brain!