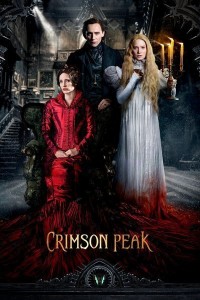 This film can generate a bad case of the willies. I first wrote about it in a 2016 post.

In the 2015 Gothic thriller, Crimson Peak, director Guillermo del Toro has crafted an atmospheric period piece designed to scare the living crap out of viewers. Young, aspiring novelist Edith Cushing (Mia Wasikowska) likes to write ghost stories, but I doubt if she planned on living one.

LISTEN TO YOUR MOM…EVEN IF SHE’S DEAD

The opening voiceover, from an adult Edith, says a lot: “Ghosts are real, that much I know. I’ve seen them all my life.” In 1887 Buffalo, NY a young Edith and her dad, wealthy businessman Carter Cushing, have just buried Edith’s mom. That night, as she lay awake in bed, her mother’s ghost floats in, and she ain’t lookin’ too good. The scary apparition tells Edith, “Beware of Crimson Peak” and then vanishes. The terrified girl has no clue what that means.

Fast forward fourteen years. Edith, now a wannabe writer, delivers a hand-written manuscript to a publisher. The guy likes her prose, and especially her flowery handwriting, but he’s not keen on ghost stories. A woman should write romance novels, he tells her. Has it always been that tough being female? (My bride assures me that it has.)

Determined to get published, Edith decides to submit her manuscript elsewhere after typing it up so that her handwriting won’t give her away. They have those newfangled machines, called typewriters, at her father’s office, so off she goes. There, she has a brief encounter with Sir Thomas Sharpe (Tom Hiddleston; yeah, Loki!), an aristocratic Brit who has come to seek financing from Edith’s dad and his group for his clay-mining invention. Seems his mansion is located atop a vast deposit of red clay.

Cushing has researched Thomas and knows that he has failed a number of times to land financing. Taking an instant dislike to the Brit, he dismisses him. Edith feels sorry for the guy. 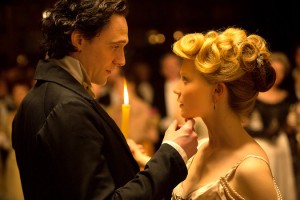 Sir Thomas charms the heck out of Edith.

That night, with Cushing off to a social event, Edith’s mom returns to deliver the same message, “Beware of Crimson Peak.” Her next visitor, Thomas, invites her to the event, and she goes. Thomas’s sister, Lucille (Jessica Chastain), is already there. Cushing is disgusted to see his daughter with Thomas, as is young Dr. Alan McMichael, a childhood friend of Edith’s, who worships her from afar. When Thomas and his creepy sister conspire apart from the others, we can tell they are up to no good.

Having expressed interest in Edith’s writing, Thomas borrows her manuscript and later praises her talent. Cushing is worried that his daughter is falling for Thomas, especially after a detective he hired uncovers some unsavory things about the Sharpes, so he bribes the siblings into leaving Buffalo. The check will clear, he says, as soon as Thomas tells Edith that her writing really sucks…which he does. Edith is devastated.

WHAT IS CRIMSON PEAK? 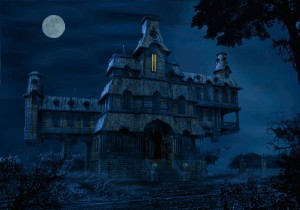 Allerdale Hall is a creepy place.

The next day Cushing is murdered in the locker room of his men’s club. Police deem it an accident. Before she learns of this, Edith receives a note from Thomas explaining why he dissed her writing and also why he had to leave. She runs to find him, and of course he’s still around. When Edith is told of her father’s death, Thomas becomes her rock. The vulnerable young woman soon marries Thomas, and they travel to his home in England.

Allerdale Hall, the Sharpe estate, looks impressive from the outside. But Edith wonders why the ground is all red. That’s the clay coming up to the surface, Thomas tells her. It is why some folks call the estate Crimson Peak. Oh crap!

All of the scheming by Thomas and Lucille is about money, of course. Despite their title the Sharpes are broke, and their goal is to have Edith sign over her inheritance to them before getting rid of her. There is something weird about the siblings’ relationship, though as yet this is unclear.

Though imposing on the outside, Allerdale Hall is a nightmare within. Snow and leaves fall from holes in the roof; huge moths flit around everywhere; the whole creepy place is in disrepair. After hearing Thomas mention Crimson Peak, and seeing the inside of the mansion, Edith, in a WTF moment, should’ve declared, “I’m outta here!” But you know what love can do. Even the increasingly creepy Lucille, who “welcomes” her there, doesn’t deter Edith. 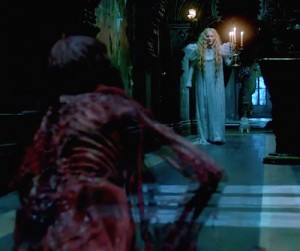 Edith is a bit taken aback by her nightly visitor.

THE MANSION’S “OTHER” RESIDENTS

As Edith settles in, Thomas grows even more physically distant from her as he immerses himself in his clay-mining invention. Cold fish Lucille seems to have one goal: to serve Edith as much tea as she can drink. Is there something in that tea? What do you think?

Even creepier: a number of frightful-looking apparitions start appearing to Edith, all of them trying to tell her something. One turns up in a bathtub; another holds a ghostly baby. If this isn’t enough to ruin her day, Edith is growing weaker and starting to cough up blood from whatever the hell they’re making her drink.

Thomas, who has begun to warm up to Edith for real, takes her into town with him. When a heavy snowfall ensues, they get a room and spend the night, where they finally make love. Lucille goes ballistic when they return the next morning, scaring the crap out of Edith. 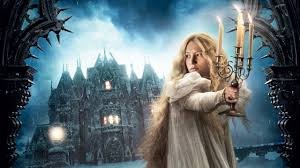 Yes, this is definitely a Gothic tale.

As Edith explores the mansion, the crimes of the Sharpes are revealed. Their marriage/murder scheme has resulted in three deaths by poisoning. Edith realizes that she is also being poisoned. The siblings have had an incestuous relationship since childhood. After Lucille gave birth to a sickly infant, they killed it. Their mother found out, so they killed her in the bathtub. Lucille also spent time in a mental institution. Oh shit, it’s really time to go! But Edith can hardly walk, plus it’s snowing like crazy outside.

Back in Buffalo, Alan McMichael has done some investigating of his own and learned all about the Sharpes. Realizing that Edith is in mortal danger, he sets out for England. But will he arrive in time to do her any good?

No spoiler alert here. The last fifteen-twenty minutes of Crimson Peak are too good to ruin for those of you who haven’t seen it. This film provided me a good share of the willies, and none of them were cheap scares. Enjoy!