Happy Thanksgiving! Well, it was earth-shaking news six years ago, when the Tremors franchise added Tremors 5: Bloodlines. But since then, we’ve seen two more hit the (small) screen! 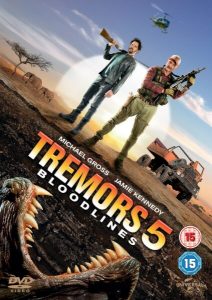 I recently re-ran my posts on the sequels to Tremors, the classic comedy-horror flick from 1990, starring Kevin Bacon. Tremors 4: The Legend Begins (2004) was actually a prequel, and aside from a short-lived TV series, it appeared that the days of the Graboids, Ass Blasters, and Shriekers were over.

But Hollywood sometimes surprises us, and in 2015, much to the delight of Tremors fans everywhere, Tremors 5: Bloodlines hit the silver screen. (Actually, it hit the smaller screen, as it went direct-to-video.) I’ll talk about that one today.

BURT GUMMER IS BACK

The one constant in all the Tremors films, and the TV series, has been right-wing whacko survivalist Burt Gummer, as played by Michael Gross. (In the prequel he portrayed Hiram Gummer, Burt’s great-grandfather.) In Tremors 5 a much longer-in-tooth Burt, just as ornery as ever, is the host of a survivalist TV series. He and his new cameraman, Travis Welker—who annoys the shit out of Burt—are approached by a South African guy named Van Wyk. Seems his country is being plagued by Ass Blasters, which Burt says is impossible, they’ve only appeared in North America. But with his monster-hunting blood boiling, and with the promise of funding for his TV show, off Burt goes, with Travis in tow. 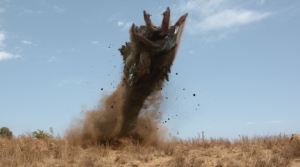 The African Graboids are rather large.

Arriving in the bush, the guys learn that not only are Ass Blasters plaguing the locals, they’ve also been around for a long time and are part of native folklore. Even worse, they’re now laying Graboid eggs, and these humongous Graboids make the ones back in Nevada look like gummi-worms. When two paleontologists working nearby uncover a fossilized skeleton and begin to celebrate, they become lunch for one of the fossil’s descendants.

NOT EXACTLY A FABERGÉ EGG

Burt and Travis have set up headquarters at an animal refuge, where Burt is angry over the South African government holding up his arsenal in customs. The weapons that Van Wyk gives him are lame; he can’t fight monsters with popguns. He confronts an Ass Blaster after it kills one of the workers, and afterward he orders the refuge evacuated to a nearby village, leaving Travis behind, as he sets off into the bush after the Ass Blaster with Van Wyk and another worker. 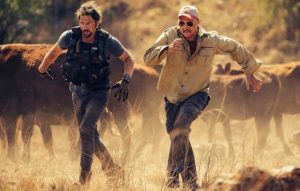 Travis and Burt create a stampede to dodge the Graboid.

At the dig site they discover the remains of the paleontologists, as well as the Graboid skeleton. Burt cannot believe how huge it is. The Ass Blaster attacks, killing the worker. When they find a Graboid egg, Van Wyk shows his true colors. He is a poacher, only interested in selling the egg on the black market. He locks Burt in an iron cage and leaves him to die.

Travis rescues Burt the next morning, and on the drive back they encounter Van Wyk, whose truck has crashed. He’s being chased by a gigantic Graboid, one whose tentacles can detach from the host, unlike the North American ones. The creature, which Burt names the Queen Bitch, devours Van Wyk (karma strikes again). Travis goes into the Graboid’s cave with a grenade and destroys most of the eggs—all but one. 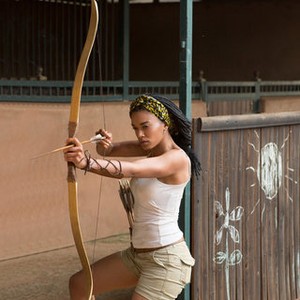 Nandi kicks some serious butt with her bow and arrows.

The animal refuge has been evacuated, save for the veterinarian—a kick-ass woman named Nandi—her little girl, and a worker who has the hots for her. When an Ass Blaster attacks, Nandi takes it down with a mean bow and arrow. What did the creature want? Same thing as the Queen Bitch, which is now on its way: the last egg, which Nandi’s daughter found and has been schlepping around in a basket. Oh crap…

I’ll stop here. There’s plenty more to come in this fun, exciting sequel, which proved a hit with fans of the franchise. Tremors: A Cold Day in Hell, came out in 2018, and Tremors: Shrieker Island in 2020. (Check out my posts on both.) For lovers of monster movies (including yours truly), these films are a hoot.