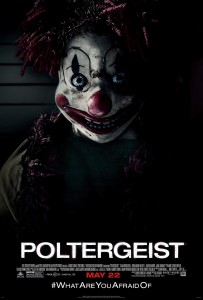 I’ve watched the Poltergeist remake a couple of times since this post last appeared in 2015. My opinion of it has not changed. But the original? Oh, classic!

I really wanted to dislike the 2015 version of Poltergeist, a reboot of the 1982 Steven Spielberg classic ghost story. (Although not credited as director, his vision was all over this film.) I’m a huge fan of the original. Okay, so the new one had its moments—good special effects and all that. But in the end my feelings were simply, meh. Why did this need to be done? In this post I’m going to work my way backwards to the original.

Like the Freelings of 1982, the Bowen family is comprised of a dad, mom, teen daughter, a boy about eight or nine, and the focal character, a girl of six. The screenwriter seemed to go out of his way to make them annoying, so it’s hard to root for any of them until the nasty spirits trapped in the house they’ve just moved into begin tormenting them. Naturally, the house had been built over an old cemetery, and the headstones had been moved elsewhere, but not the bodies.

The youngest daughter, Madison, delivers the familiar “They’re he-ere” line before the spirits pull her into the parallel dimension. As before, the family enlists a paranormal research team to help them, but unlike the original the lead researcher does not call in a spiritual medium, but rather a reality show guy who “cleans” houses of malevolent spirits. In this version we do see the creepy world that exists between the closet and the opening in the ceiling to our world. These scenes can for sure give you the willies.

But like I said, why bother? It added nothing new to the series, something that critics and viewers alike noted. It did well at the box office—perhaps the many long-time Poltergeist fans were simply curious—but it was no big deal. 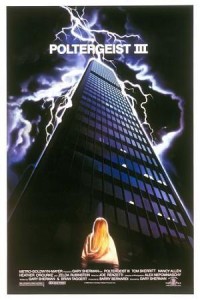 The original Poltergeist trilogy is said to be cursed by all manner of deaths and accidents, and if so, that curse came to a head with the making of the second sequel. You’ll soon see what I mean.

Poltergeist III was uniformly disliked by critics and fans. To begin with, the Freeling family from the first two films had dwindled to one: Carol Anne. (The adorable Heather O’Rourke, she of the famous “They’re he-ere” line.) Instead of a big house in California the setting shifted to a Chicago high-rise, where Carol Anne has been sent to stay with relatives for protection from the spirits. Naturally the creepy “Beast,” Reverend Henry Kane from the first sequel, has followed her there and is intent on messing with everyone in order to get at her. (Julian Beck, the actor who played Kane in Poltergeist II, died during filming, so another actor took the role in the second sequel.)

For one like me who is easy to entertain, this film fell short on all levels, and its poor box office discouraged any further sequels. In retrospect it should never had been made or released, primarily for one reason. Heather O’Rourke, age eleven at the time, was ill during most of the filming. She died just after her twelfth birthday, while the film was in post-production. When the filmmakers decided to reshoot the ending, the scene focused on some of the other actors, and Carol Anne’s only “appearance” was via a body double dressed in her red pajamas and filmed from the back. Such a sad legacy. 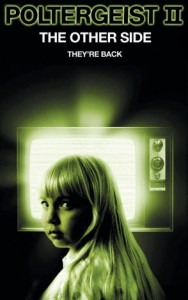 The first sequel is okay. Once again the Freeling family, minus teenaged daughter Dana, is menaced by the spirits from their previous house. (Dominique Dunne, the actress who played Dana in the first film, was murdered at the age of twenty-two a few months after its release.) An archaeological excavation below the site of the other house has turned up a cave, and spiritual medium Tangina Barrons (Zelda Rubenstein) senses that this is where an insane preacher, Henry Kane, led many people to their deaths a century ago. Knowing that Kane will come after Carol Anne, she enlists the help of a Native American shaman named Taylor (Will Sampson) to protect her. (Sampson died at the age of fifty-three not long after the movie was released.)

Poltergeist II: The Other Side takes viewers where the first film did not: the space between this world and The Light, the passageway to the next world. Its reviews were weak, and it did not make as much money as its predecessor, but enough to—unfortunately—warrant one last sequel.

With Spielberg at the helm, this movie is the gold standard of the series. A huge commercial success, it was and still is much loved by critics and viewers. Nominated for three Academy Awards and winning many other honors, it appears on just about every “Best” list for genre films, and even on quite a few non-genre lists. Even with three-decades-old special effects, it still has the chops to cause some sleepless nights. (Scenes like Robbie and the tree, and the research assistant cooking up a steak and then peering into the mirror, and—of course—The Clown.) 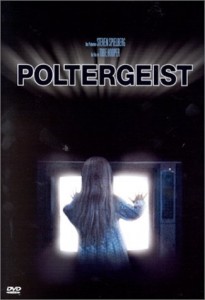 You doubtless know the story: the goofy Freeling family living the American Dream in a big Southern California tract home. The “TV people” connecting with Carol Anne and ultimately pulling her into their plane of existence. (Her line, “They’re he-ere,” remains part of the vernacular.) The family’s struggle to bring her back. Tangina, the spiritual medium, declaring, “This house is clean”—when of course it isn’t. And so on.

I suppose movies that do well at the box office will always spawn sequels, remakes, and such. But with rare exceptions—Aliens comes to mind—you can’t beat the original. I’ll be watching Poltergeist many more times before the Mother Ship arrives.