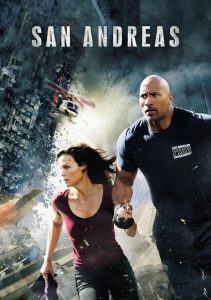 When will the Big One hit? We Californians know that it’s not a matter of IF, but WHEN. This post first ran in 2018.

We had an earthquake here in Southern California last week. Like, what else is new? The 4.5 temblor—its epicenter in Riverside County near the San Andreas fault—occurred just before 5 a.m., which means I sure as heck did not feel it. Two subsequent aftershocks also went unnoticed. This quake was not even close to the long-prophesized Big One.

Which brings me to the 2015 disaster film, San Andreas, starring The Rock himself, Dwayne Johnson. (Does it seem like he has starred in every movie released over the past few years?) As with most films of the genre, the scientific community scoffed at this one. But as an aficionado of disaster films, I loved this OTT (over-the-top) CGI spectacle, which received so-so reviews but made a lot of money.

WE ALWAYS KNEW THIS DAY WOULD COME

With this tagline (among others), the story begins with L.A. Fire Department Air Rescue helicopter pilot Ray Gaines (Johnson) rescuing a woman trapped in a car that had gone over a cliff. All in a day’s work. Ray is in the midst of a divorce from his wife, Emma (Carla Gugino). The catalyst: their younger daughter drowned in a boating accident a while back, and Ray continues to blame himself for her death.

Cal Tech seismologist Lawrence Hayes (Paul Giamatti) and his young assistant travel to the Hoover Dam in Nevada to investigate a series of minor quakes in an area that supposedly has no fault lines. A massive quake destroys the dam, killing the assistant. Hayes, believing multiple “Big Ones” are set to devastate much of California all the way up to the Bay Area, rushes back to try and warn the public.

Ray was supposed to take a trip with his surviving daughter, Blake (Alexandra Daddario), to San Francisco, but he is ordered to assist in the Hoover Dam disaster. Blake will instead fly to the Bay Area with her mom’s boyfriend, rich guy Daniel Riddick. Emma heads out to have lunch with Riddick’s sister at a restaurant atop a downtown L.A. high-rise building.

IS “RICH ASSHOLE” A REDUNDANCY?

In San Francisco, Blake waits for Riddick in the lobby of his headquarters building, where she meets Ben, a young engineer seeking employment, and his kid brother, Ollie. When Riddick returns, he and Blake get in his car and start to leave the underground parking structure. A strong earthquake hits the area, and Blake’s legs are pinned. Riddick manages to get out, and the cowardly asshole abandons her. Ben and Ollie are able to rescue Blake, and they set off through the streets of the devastated city. 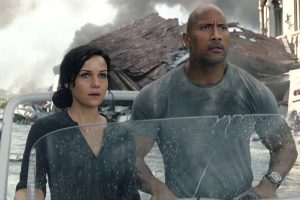 Emma and Ray cannot believe what is happening around them.

As he leaves for Nevada, Ray calls Emma to apologize for some words that passed between them the previous day. When the earthquake hits Los Angeles, Ray tells Emma to get to the roof, that he’ll come for her. She tries to tell others to go up, not down, but no one listens, and they are all killed. As the building collapses, Ray manages to rescue her (a real OTT moment) and, realizing that the quake has occurred along the entire San Andreas fault line, they head out for San Francisco with the hope of finding Blake.

Blake, Ben, and Ollie find a satellite phone in an electronics store, and Blake manages to contact her parents. Ray says that they’re coming for her and instructs her and the guys to get to the Coit Tower. Emma is stunned to learn that Riddick abandoned Blake. She calls his voicemail and leaves an awesome message: “You left my daughter alone? If you’re not already dead, I’m going to fucking kill you!” (She won’t have to; karma will see to that.)

Ray’s chopper stalls out over Bakersfield, and he manages to safely crash it into a shopping mall, where all kinds of looting is going on. They steal an SUV from some of the looters, and once again they’re off…but not too far, for a huge crack in the San Andreas fault is now in their path. They encounter an elderly couple and learn that the husband is a pilot with a small plane at a nearby airfield. Ray swaps the SUV for the plane (I’m not making this up), and the journey continues. 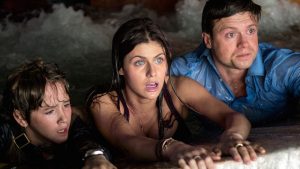 Ollie, Blake, and Ben are in serious trouble.

THE REALLY BIG ONE

As they near the Bay Area, Emma and Ray are stunned by the devastation below. The Coit Tower and surrounding area are destroyed, and they hope that Blake and her friends were able to divert from there. Because there is nowhere to land, they skydive from the plane and wind up on the baseball diamond at ATT Park. (I’m not making this up!)

And that is when the Really Big One—a 9.6 quake—hits.

Blake, Ben, and Ollie barely survive the monster quake, though Ben is injured. Their immediate goal is a nearby high-rise building under construction—ironically, by Riddick’s company. Blake believes her dad would expect her to go to the highest point she can find. 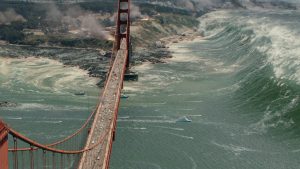 The Golden Gate Bridge is about to go down…again.

Ray and Emma, also surviving the Really Big One, commandeer a boat and head into the bay. That’s when they see the water in the bay receding. Holy crap! Ray knows what that means: TSUNAMI! We’re talking the mother of all tidal waves, and it’s a couple of minutes away from engulfing the Bay Area.

No spoiler alert—if you haven’t seen this film, you’re in for some more OTT moments topping all previous OTT moments. San Andreas has everything a good disaster movie can offer, and there is even the possibility of a sequel…though knowing Hollywood, I’ll believe that when I’m on my way to the local Cinepolis to see it.