Some real star power in this film. I first presented the post in 2017. 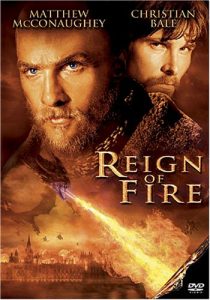 Three of Hollywood’s leading men in one movie? Yes, the 2002 post-apocalyptic fantasy, Reign of Fire, gave us Christian Bale, Matthew McConaughey, and Gerard Butler, all with a common goal: kill the dragons, before humankind on Earth is no more.

Dragons, the film informs us, were what destroyed the dinosaurs. They have gone through many cycles, at times laying waste to all life on the planet, then going dormant while Earth regenerates itself. As the story begins, dragons are nothing more than legends. But not for long…

In London, a preteen named Quinn visits his mom, a construction worker helping to build a new subway tunnel 150’ below ground. A cave has been discovered, and Quinn decides to explore it. He comes across a huge dragon, awakening from its long hibernation. The fire-breathing monster emerges, killing many workers, including Quinn’s mom. The boy survives.

These dragons can bring the heat…

By way of a montage of news and magazine reports, as well as narration, we learn that dragons overran the planet, and even the use of nuclear weapons could not stop them. By the year 2010 humankind was almost extinct.

A HARD ROAD TO SURVIVAL

In the year 2020 the adult Quinn (Bale) and his friend, Creedy (Butler), lead a small community of survivors living in an old castle in the northern part of England. There are few adults but many children, who Quinn hopes will be the future of this bleak land. The community, practically starving, is awaiting a harvest.

A few people, fed up with Quinn’s leadership, leave the castle. They stop at the growing fields to pick the few tomatoes that have matured. A dragon attacks, killing some of them. The rest are rescued by Quinn as most of the hoped-for harvest burns. 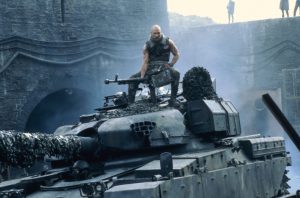 A small army of Americans, led by a badass named Van Zan (McConaughey, hardly recognizable), show up with a tank and a helicopter, the latter piloted by a woman named Alex. They are dragon slayers, Van Zan says; they have a method of killing the monsters at twilight, when their vision is poor. He and Quinn don’t exactly hit it off too well. But later, Quinn’s actions help the Americans kill the dragon that destroyed the crops after three of Van Zan’s men died in the attempt.

Van Zan tells Quinn that all of the dragons killed by his team were females, that he believes only one male exists in the world to fertilize all of the eggs produced by the females. This is why he came to England; the male, he has deduced, is somewhere in or around London.

Of course it is, as Quinn well knows. It is the dragon he came across in the cave many years ago, when he was a boy—the one that killed his mother. But he refuses to go to London and help Van Zan. The attempt, he believes, is doomed to fail. 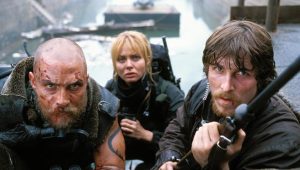 Van Zan, Alex, and Quinn are not looking forward to their London trip.

Van Zan tries to conscript the few adults in the castle into his small army, but Quinn and Creedy rebuff him. The Americans leave for London, first stopping in a small, ruined town along the way. There, they are attacked by the male dragon, and only Van Zan, Alex, and one other man survive.

The dragon then attacks the castle, killing many of its inhabitants. Quinn struggles to get the survivors—most of them children—to the safety of a bunker. Creedy helps him accomplish this but is killed by the dragon, which devastates Quinn.

Van Zan and the others return to the castle in the helicopter and free the survivors from the bunker. He and Quinn believe that the male dragon has returned to its nest. Quinn knows exactly where it is, and this time he’ll go along and show them. With little more than a hope and a prayer, he boards the chopper with Van Zan and Alex, and they set off for London…

No spoiler alert; if you haven’t seen Reign of Fire, check it out. Matthew McConaughey’s turn as the badass Van Zan is worth the price of admission alone, and the dragon effects are pretty cool.